Does SEA Games construction in Subic have environmental permit? Facebook Twitter Copy URL
Copied
The venue in the West Ilanin forest – an environmentally-protected area – is supposed to be used for the shooting competition of the SEA Games, even if there is an existing firing range just a kilometer away

ZAMBALES, Philippines – The government is developing a venue for the upcoming Southeast Asian Games here within an environmentally-protected area inside the Subic Freeport, but concerned offices cannot give any categorical confirmation if the project has an environmental clearance certificate (ECC).

The venue at the EOD point in West Ilanin forest is supposed to be used for the shooting competition of the SEA Games, even if there is an existing firing range just a kilometer away.

The EOD point is less than a kilometer away from the firing range used by the United States Navy in the former military camp and is now under the control of the Subic Bay Metropolitan Authority (SBMA).

Rappler tried to seek the SBMA Ecology unit’s comments, but our queries were left unanswered. SBMA Chairperson and Administrator Wilma Eisma, who is normally active on social media, has grown silent.

There are several locators – like Ocean Adventure, Zoobic Safari, Kamana resort – in the buildable areas in the West Ilanin forest, but they had to secure environmental compliance certificates or ECCs after a long process to mitigate the impacts the projects might have on one of the last remaining environmentally critical areas in the province.

The fastest period within which ECCs are issued in the region is two to three months.

In a phone interview, Loy Arpon of CFV Contractors confirmed to Rappler that they were the contractors for the “rushed job,” but that he didn’t have the information about their ECC because “somebody else is handling the paperwork.”

Rappler learned that the Philippine Sports Commission endorsed the project to the SBMA, which is responsible for ensuring that the project complied with environmental requirements inside the SBFZ. 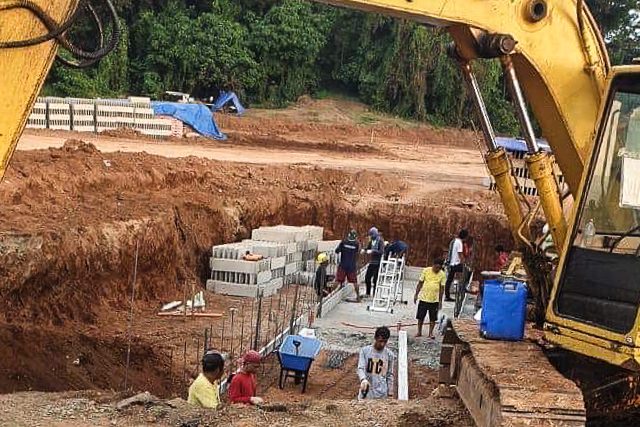 Earlier, Eisma released a statement that all venues for the SEA Games in Subic were prepared to host all 17 games scheduled to be held here. She added that the rehabilitation and preparation of the various sports venues here were already completed.

As of posting, however, contractors still had ongoing works in various sites all over the Subic Freeport.

Asked whether they had the required environmental permits, or an ECC, Arpon only said: “We were given this area to work. Somebody else is handling the ECC. That is not under the contractor. We will have to clarify that.”

He also said that whatever penalties would be imposed would be “up to the two agencies (PSC and SBMA), we will just clarify with them. We are not aware of what permits are needed because we are based in Metro Manila. We deal directly with the procuring entity in Metro Manila.”

Arpon said that he also did not know why the venue was switched from Clark to Subic. The major works being done in the protected area was first exposed through videos posted on Facebook by Subic Bay Marine Exploratorium Inc president and CEO Robert Gonzaga. The videos showed heavy machinery dumping layers of fill earth onto the venue, cut down trees by the side of the road, and no signages displaying the permits of the contractor.

In his post, Gonzaga asked, “Is the SBMA exempting certain contractors from getting environmental permits when they undertake construction projects in Protected Areas inside the Subic Freeport Zone?”

He added: “There are no signages around to show that these contractors have any permits, and needless to say, these are major violations of the law. The reason for going through the ECC process is to make sure that whatever adverse environmental impacts a project might have is addressed, mitigated, or prevented entirely. Absent these things, how would anyone know what the risks are and what damage is being done, immediately or later down the road?”

The videos have now been viewed thousands of times and shared across the social network.

Sought for comment, Gonzaga said that “top SBMA officials have a lot of explaining to do, and they must be held accountable. Even if the PSC was responsible for the switch in venue from Clark to Subic, it’s SBMA which is ultimately responsible that its precious assets – the living forest – is protected. It looks like they themselves broke environmental laws and their own policies. The SEA games will only last a few days, but the cost of SBMA’s irresponsibility will last for a lifetime.” – Rappler.com