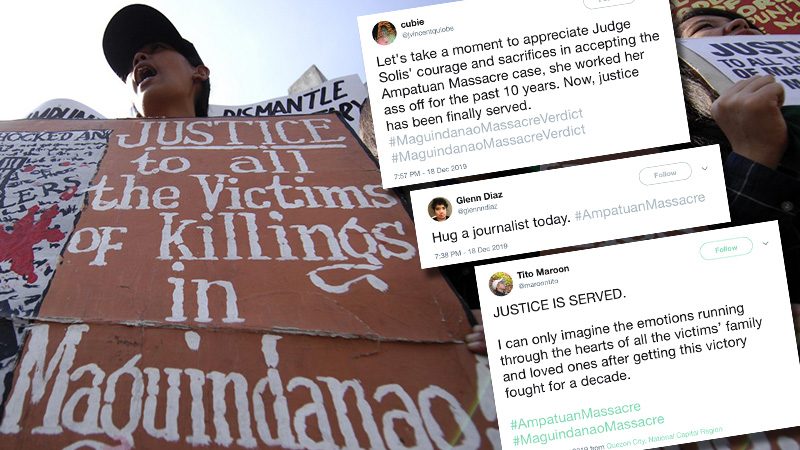 After a decade, Ampatuan brothers Datu Andal Jr and Zaldy were convicted of 57 counts of murder in the 2009 Ampatuan massacre and were sentenced to reclusion perpetua without parole. Their other brother Datu Sajid Islam Ampatuan was acquitted.

Shorty after the guilty verdict, hashtags #MaguindanaoMassacreVerdict and #AmpatuanMassacre topped the Twitter trending topics in the Philippines. Social media users posted their appreciation for Judge Jocelyn Solis Reyes, thanking her for her “courage and sacrifices” while others wished for her safety.

Let’s continue to pray for the safety of the Lawyers of the defendants, especially the Judge who held the final verdict. These powerful Ampatuan clan won’t stop for sure, til they get their family members out of jail. #MaguindanaoMassacreVerdict

"The case was raffled off to Judge Jocelyn Solis-Reyes in December 2009 after Judge Luisito Cortez refused to take it on out of fear for his and his family's safety. "

GRABE. NOTHING BUT RESPECT FOR THIS STRONG WOMAN. #MaguindanaoMassacreVerdict

The Ampatuan massacre, which killed 58 people, 32 of them journalists, is said to be the deadliest attack on media in the world. (READ: Did prosecution do enough? Ampatuan massacre verdict out today)

Here are more tweets about the verdict:

What are your thoughts on the Maguindanao massacre verdict? Let us know in the comments! – Rappler.com