Dec 19, 2019 2:53 PM PHT
Sofia Tomacruz
Facebook Twitter Copy URL
Copied
But the 'narrative on the protection of media workers is far from over,' says Presidential Spokesperson Salvador Panelo, who was once a lawyer for Datu Andal Ampatuan Jr 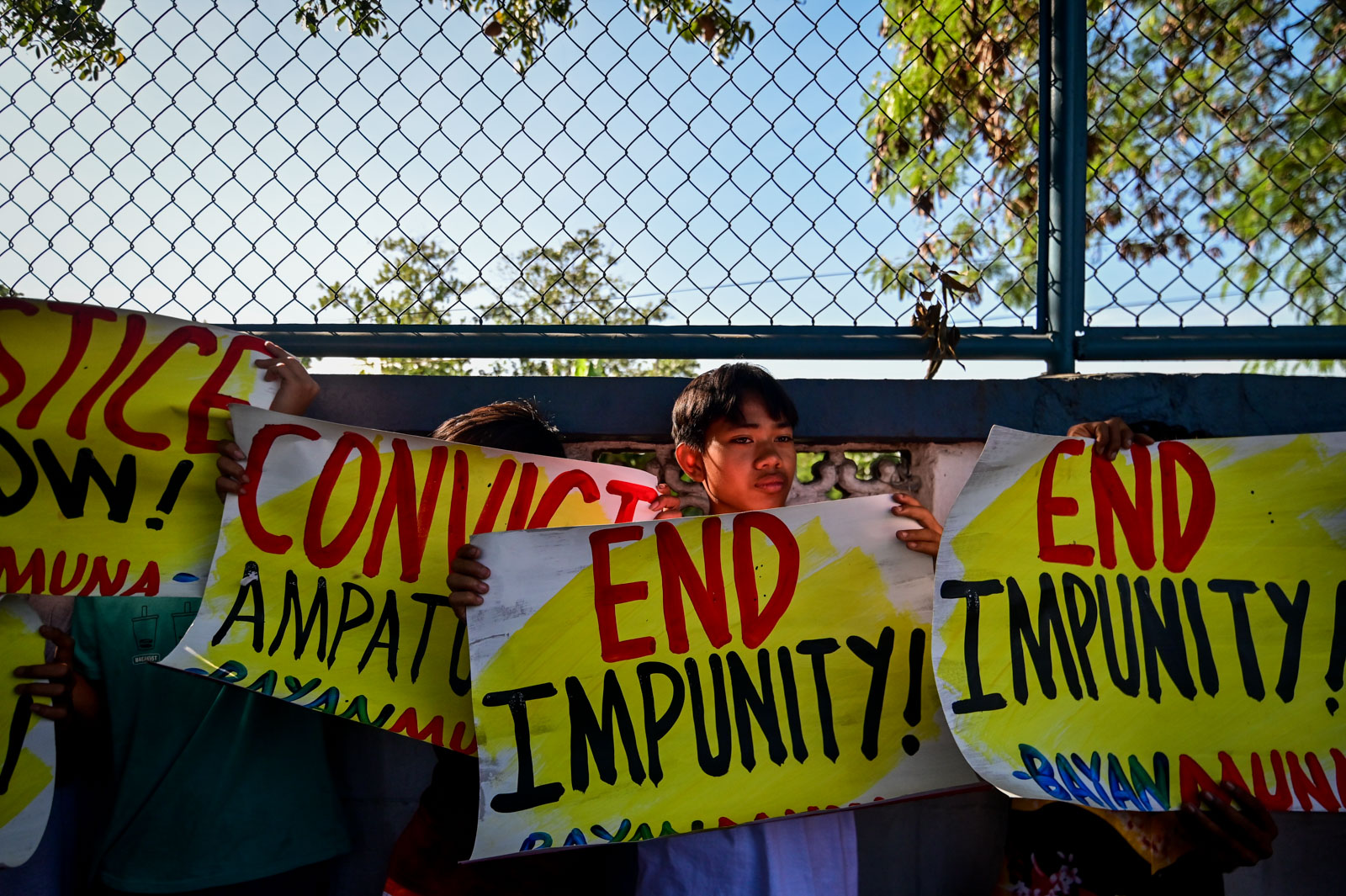 MANILA, Philippines – After a decade-long trial, Malacañang on Thursday, December 19, welcomed the Quezon City Regional Trial Court’s decision to convict most the Ampatuan brothers who were principal suspects in the murder of 58 people.

Presidential Spokesperson Salvador Panelo said the Palace would “respect” the decision of QC RTC Branch 221 Judge Jocelyn Solis Reyes sentencing the Ampatuan brothers Datu Andal Jr and Zaldy to reclusion perpetua or up to 40 years in jail without parole.

“The court has spoken and rendered its decision on the basis of the evidence presented by both the prosecution and the defense. There were verdicts of guilty and acquittal. It behooves the parties to respect them,” Panelo said in a press briefing on Thursday afternoon after the verdict was handed down.

“Ultimately, it will be the Supreme Court that will give the final judgement. For now, what is important is that the rule of law has prevailed,” said Panelo, who once served as counsel for one of the principal suspects.

The long-awaited decision in the Ampatuan massacre case was handed down in a tightly-secured courtroom inside Camp Bagong Diwa in Taguig City. It saw 28 convicted of 57 counts of murder and sentenced to 40 years. Meanwhile, 15 were sentenced to 6-10 years for being accessories to crime. Fifty-five persons – including Datu Sajid Islam Ampatuan – were acquitted.

“The Maguindanao Massacre marks a dark chapter in recent Philippine history that represents merciless disregard for the sacredness of human life, as well as the violent suppression of press freedom. This savage affront to human rights should never have a duplication in this country’s history,” Panelo said.

What does Duterte say? Asked for President Rodrigo Duterte’s reaction to the historic verdict, Panelo said he had yet to speak to the President on the matter.

“I don’t know if he (Duterte) was already awake at the time because that is his sleeping time. Last night we were so late again and I noticed he was very tired because past midnight na kami natapos (we finished past midnight),” he said.

Panelo refused to issue a personal comment on the outcome of what has been called the trial of the century as he stuck to the Palace’s statement saying it respected the court’s decision.

“Whatever I say might be misinterpreted, so I’d rather not,” he said.

While representing Datu Andal Ampatuan Jr 5 years ago, Panelo said in a 2014 interview with the Philippine Star he was “more convinced” the Ampatuan clan was framed up by political opponents who wanted to seize power in the province.

The work is far from over: Panelo said that while the promulgation of judgement in the high-profile case had been handed down, “the narrative on the protection of media workers is far from over.” He cited the work of the Presidential Task Force on Media Security, whose creation was facilitated through Duterte’s first administrative order as president.

“The President and the whole of government see this as a constant trial and is therefore still hard at work in building a nation where wanton acts of violence can be prevented so that any intention to threaten our democracy will not prosper even at its inception,” he said.

Under the Duterte administration, unprecedented data of media attacks have been recorded, with 128 attacks on the press seen from June 30, 2016, up to April 30, 2019, according to the Freedom for Media, Freedom for All Network. Of this number, 12 are cases of killings. – Rappler.com