Areas under state of calamity due to Typhoon Ursula Facebook Twitter Copy URL
Copied
(3rd UPDATE) The provinces of Eastern Samar, Biliran, Leyte, and Aklan as well as the city of Tacloban, are under a state of calamity due to the trail of destruction left by Typhoon Ursula

TACLOBAN CITY, Philippines (3rd UPDATE) – Some areas declared a state of calamity following the onslaught of Typhoon Ursula (Phanfone), which made landfall in Eastern Visayas on Tuesday, December 24.

Here is a list of areas placed under a state of calamity due to Ursula:

The province of Leyte was placed under a state of calamity on Thursday, December 26, due to the trail of destruction brought about by Typhoon Ursula.

According to Vice Governor Carlo P. Loreto, the decision came after the Provincial Disaster Risk Reduction Management Council of Leyte released its assessment.

“There is an urgency for immediate repair and rehabilitation of severely damaged public structure of government agencies and providing assistance to restore livelihood and living condition of people,” Loreto said.

Moreover, a total of 1,941 families were evacuated as of 3 pm on Tuesday, December 24, from the towns of Palo, La Paz, Dulag, Babatngon, Barugo, San Isidro, Ormoc, Isabel, Bato, Abuyog and Jaro in Leyte.

According to Roel Montesa of PDRRMO Leyte, a 13-year-old boy from Baybay City died after he was electricuted. In Kanangga Leyte, Ramil Rosal Sr., 37 yrs old died due drowning, while his son Rey Jun Rosal is still missing.

“We are a mixture of feelings right now, were supposed to be festive because it’s Christmas but at the same time we feel for those affected by Typhoon Ursula,” Vice Governor Loreto said.

The province of Eastern Samar was also declared under a state of calamity on Friday morning, December 27.

In the initial report by the PDRRMO and the governor’s office, more than 15 percent of the population of the entire province experienced the brunt of the typhoon. Thus the need for emergency assistance such as food, shelter, and health services.

On December 26, Aklan’s provincial board passed Sangguniang Panlalawigan Resolution No. 2019-305 declaring a state of calamity throughout the entire province.

The resolution cited “widespread devastation” by Typhoon Ursula “which hit all towns of the province” on Christmas Day.

As of 4 pm Saturday, December 28, 5 deaths and 51 injured have been recorded by the Aklan PDRRMO. The National Disaster Reduction Risk Reduction and Management Council (NDRRMC), however, reported 4 deaths and 11 injured so far as of their 6 pm report on Saturday.

Around 205 families or 1,006 people remained in evacuation centers, said the NDRRMC.

The Biliran provincial government also declared a state of calamity on Friday, December 27.

In a report dated Friday, December 27, the provincial disaster risk and management council said that there is a need to provide immediate shelter assistance to the affected families to help repair their damaged houses.

More 15,000 families or over 66,000 individuals were affected by the onslaught of Typhoon Ursula in the province. The provincial disaster risk reduction management office also estimated that Ursula damage to the province cost almost P800 million.

Tacloban City-Palo area in Leyte was Typhoon Ursula’s second stop after it made landfall in Salcedo, Eastern Samar on Tuesday afternoon, December 24. Leyte was the province hardest hit by Super Typhoon Yolanda (Haiyan) in November 2013.

The city council also placed the entire City of Tacloban under a state of calamity on Friday December 27 due to the damage to property, lifelines, critical facilities, and residences during the onslaught of typhoon Ursula on Tuesday.

According to Vice Mayor Jerry ‘Sambo’ Yaokasin, the strong winds and heavy rains, affected the entire 138 barangays of the city, causing heavy damage to properties of those belonging to high risk structures particularly along the coastal portion and medium risk structures.

Aside from destroyed agricultural products, there’s still an absence of water and electric power in almost 80% of the entire city.

Based on the initial findings of the Rapid Damage Assessment and Needs Analysis (RDANA), all 83 barangays covered by the initial RDANA conducted have reported damage to properties and life. While Tacloban City was among those that felt the brunt of Typhoon Ursula’s wrath, its mayor assured on Christmas Day that the city reported no fatalities from the disaster.

“Based on our report, we do not see any fatality,” said Tacloban City Mayor Alfred Romualdez to Rappler.

A fire also razed the homes of families in Brgy. 66 in Tacloban City, almost at the same time as Typhoon Ursula’s landfall in the area. 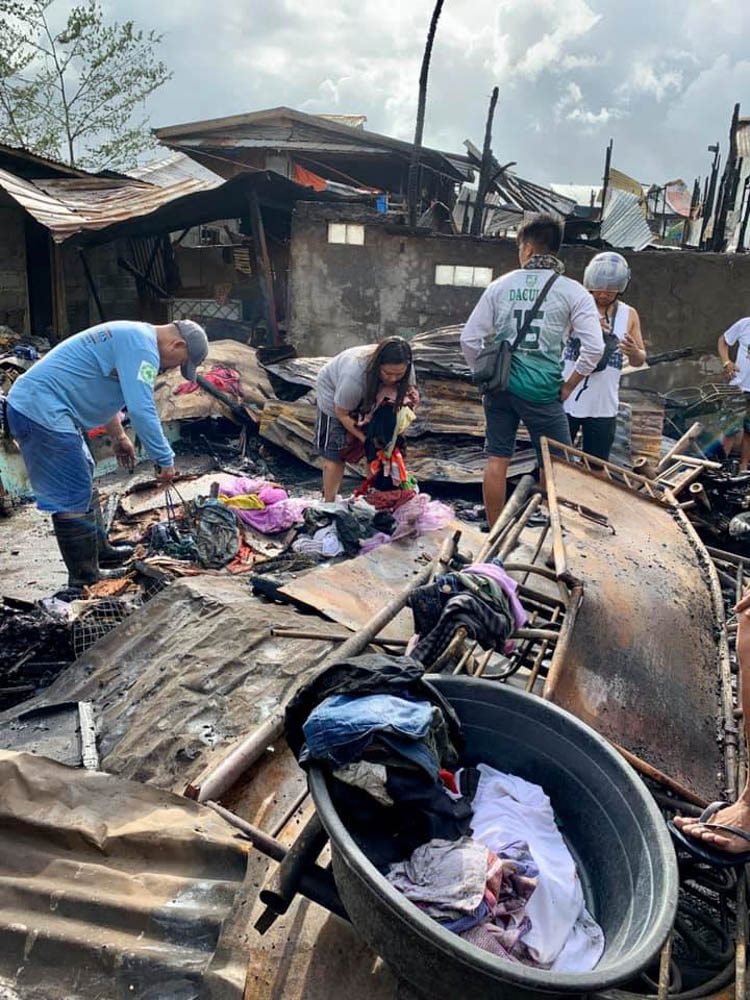 Meanwhile, more than 15,000 residents from coastal areas in Tacloban City were affected by the Typhoon Ursula’s strong winds and rain, according to Ildebrando Bernadas, the Head of the CDRRMO.

Several buildings and homes in Tacloban City were also destroyed due to the typhoon.

In preparation for Typhoon Ursula, Tacloban City activated 12 of its 72 evacuation centers. While the evacuation centers don’t have modular tents yet, the city government said they’re eyeing to purchase a number of these by next year.

Romualdez said that residents were informed that a select number of evacuation centers will be open for Typhoon Ursula and that there may be a need to evacuate their houses as a precaution. However, he noted that many of the residents voluntarily went to the evacuation centers upon learning that the typhoon was coming.

(The lesson is to always be prepared because we don’t know what will happen. The direction of the wind and the typhoon does change every now and then.)

CDRRMO is also currently developing a safe city app, which will be used for disaster rescue and management. It’s expected to be launched in 2020. – Rappler.com