Joma Sison: Despite hiccups, CPP won’t back out of peace talks 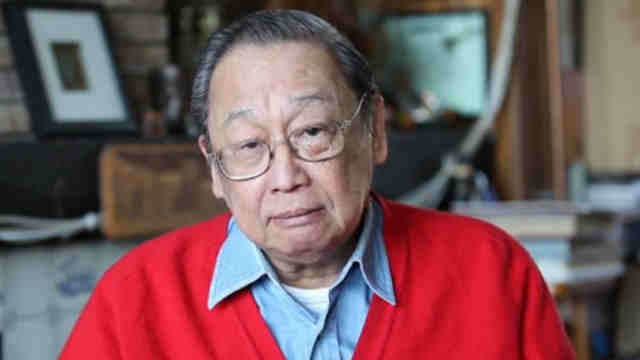 BUTUAN CITY, Philippines – Communist rebel leader Jose Maria “Joma” Sison may have serious apprehensions about the government’s offer of another attempt at peace negotiations, but his party will take it anyway, he said on Monday, December 30.

Speaking to a group of Mindanao-based reporters via Skype, Sison, who is on self-imposed exile in the Netherlands, said the military’s “swarming” of a yearly communist party assembly in Surigao del Norte on Sunday, though undoubtedly tense, was no reason to back out of the planned peace talks.

Members of the Communist Party of the Philippines (CPP), whose founding chairman is Sison, ended up cancelling its annual plenum after it reported the heavy presence of Philippine Army soldiers from the 30th Infantry Battalion around their venue in Gigagquit town, and nearby Bacuag town.

“The military had hostile and provocative actions from the incident last night, which can be raised to the Joint Monitoring Committee, but I will not run ahead from the complaint to be made…. The incident will not be enough for us to pull out of the peace talks,” Sison said.

The CPP had declared a holiday ceasefire that began on December 23 and will last until January 7, 2020, which the government reciprocated.

However, the military and police reported 3 separate attacks on December 23 that they blamed on the New People’s Army (NPA), the CPP’s armed wing. One Army soldier was killed and 6 others were wounded in one of the incidents. The government then accused the CPP of violating the ceasefire but nevertheless did not withdraw its offer of peace negotiations.

On Sunday, after calling off its assembly, the CPP accused the Armed Forces of the Philippines (AFP) of being an unwilling party to the ceasefire.

Defense Secretary Delfin Lorenzana lashed back at the CPP on Monday, saying he and the military take exception to its “preposterous accusation.”

“Look who is talking! They, members of the terrorist CPP-NPA, are the peace spoilers. They prostituted and violated every ceasefire that has been declared,” Lorenzana said in a statement to reporters.

The ceasefire allows units of the AFP to keep up patrols and to defend themselves in case of an attack, and the military “has faithfully and dutifully observed ceasefires,” Lorenzana added.

Before President Rodrigo Duterte reciprocated the CPP’s unilateral ceasefire, Lorenzana said he would not recommend a truce because the guerrillas tended to take it as an opportunity to regroup.

The defense chief pointed out that it was a ceasefire violation by the NPA that prompted Duterte to terminate an earlier round of peace negotiations in November 2017.

On Monday, Sison said the “swarming” of Gigaquit and Bacuag put the NPA on the defensive, but that no skirmish happened, and therefore no ceasefire violation from either side.

Duterte’s announcement on December 5 of reviving peace talks with the communist rebels came as a surprise even to Sison. Malacañang said it was a gesture borne out of the President’s “earnest desire for peace.”

Sison’s hunch is that Duterte wants to be remembered as the one who would end the communist insurgency, which marked its 51st year on December 26.

Duterte’s military approach to the rebellion has so far been unsuccessful despite imposing deadlines on the AFP, Sison said. With only two years left in office and rumors of illness, Duterte must be having “a change of heart,” hence the offer of peace talks, Sison added.

But because the President insists on holding the negotiations in the Philippines, and dares Sison to meet him one-on-one in Manila beforehand, Sison thinks the offer could also be a ploy to get him out of exile and arrest him. (READ: Duterte, Joma Sison can’t agree on venue for peace talks)

“But lets us see. While we are cautious, we also have a desire to make agreement to the social, economic reforms which is beneficial to the Filipino people. So it’s a step by step process. There is caution and desire to create an agreement for reforms towards just peace,” Sison said. – with a report from JC Gotinga/Rappler.com