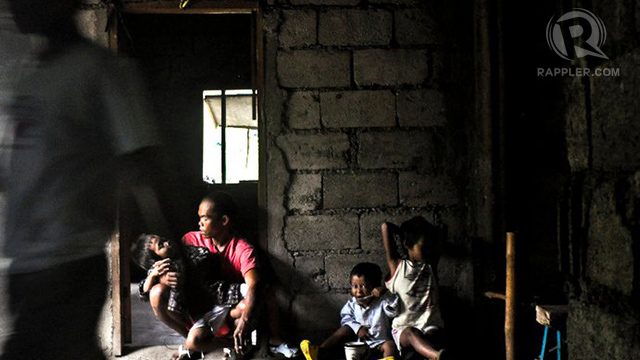 MANILA, Philippines – In the last quarter of 2019, 54% of families considered themselves poor, according to the latest Social Weather Stations (SWS) survey. That result of the survey conducted in December was 12 percentage points above the previous mark of 42% in September 2019.

The SWS said that 54% translated to around 13.1 million self-rated poor families in December 2019. In September that year, it was at 10.3 million.

The latest figure leaped to its highest in over 5 years, when the self-rated poverty rate climbed to 55%  in September 2014.

The December 2019 figure was a jump of 3.6 million more families who considered themselves poor from the “record low” first quarter survey conducted just at the beginning of previous year..

How much they would need

The self-rated poverty threshold (SRPT) – the minimum monthly budget poor families need for home expenses not to be poor – had a median value at P12,000 in 2019.

The families were also asked how much they lacked (“Magkano pa po ba ang kulang ninyo sa ngayon?”) compared to their SRPT. The result would refer to the self-rated poverty gap (SRPG). The median SPRG was P5,000 in December.

The remaining 40% always considered themselves poor, which translated to 9.7 million families.

The self-rated food poverty threshold (SRFPT) – the minimum monthly food budget poor families need in order for their food to not be poor – had a national median at P5,000 in December.