Asked by Russian TV if he’s fit to govern, Duterte rails vs Rappler instead 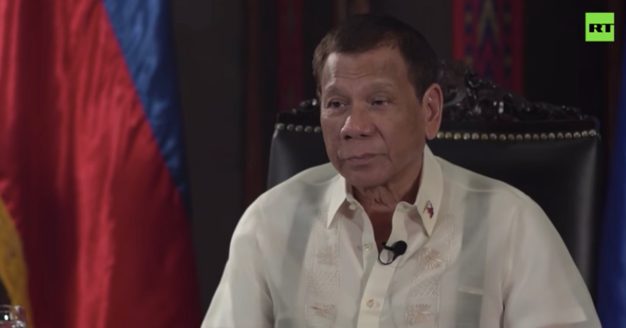 MANILA, Philippines – Lashing out against media once more, President Rodrigo Duterte falsely claimed Rappler reported on his “absence” in areas affected by the ongoing eruption of the Taal Volcano.

The President also reiterated lies crafted by his own defenders, as he claimed Rappler was “foreign-owned” and the “mouthpiece” of the United States and its Central Intelligence Agency. Contrary to Duterte’s claims, Rappler is 100% Filipino-owned, and the CIA is not one of its funders.

Duterte made the remarks in an interview with Russian TV network RT, short for “Russia Today,” where he was asked if he was fit to govern in light of public concern over his health and his “recent absence during the Taal Volcano eruption.”

RT anchor Murad Gazdiev asked: “Your recent absence during the Taal volcano eruption and people have been worried, there has been widespread concern about that absence and about your health. Are you still fit to be president?”

Duterte focused on the context of the question and attacked Rappler instead.

“You know please do not believe the media. Especially the Rappler, that’s the mouthpiece of the CIA and the US. I was there before they made the announcement that I did not go. I was there two days earlier then I went home to Davao to rest. When I came back last night, I went directly again to the evacuation areas. So do not believe that kind of garbage that’s being dished out by Rappler, which is an American CIA-funded news agency,” he said.

Rappler fact-checks each of Duterte’s claims and debunks his assertions against us.

Claim 1: “I was there before they made the announcement that I did not go.”

Rappler has not published a news report claiming Duterte’s absence in areas affected by the Taal Volcano eruption. In fact, Rappler reported on each of his visits so far and on the plans as well as response planned for the ongoing disaster.

On January 14, Rappler reported Duterte’s announcement that he would visit communities affected by the Taal Volcano eruption, despite warnings from his doctor about the potential hazard of volcanic ashfall. This was mentioned in an ambush interview with reporters after he appeared before the Philippine Marine Corps on the night of January 13, a day after the volcano erupted.

On the night of January 14, Rappler again reported on Duterte’s first visit to affected areas as well as the situation briefing held with concerned agencies in Batangas City.

Rappler also has an updated list of Duterte’s absences and skipped events, which does not list any scrapped visit to residents or areas affected by the eruption of Taal Volcano.

Claim 2: “When I came back last night, I went directly again to the evacuation areas. So do not believe that kind of garbage thats’ being dished out by Rappler.”

We also reported on his second visit to affected residents on Monday, January 20, where he requested Congress toprovide a supplemental budget of P30 billion to respond to damage from the eruption of Taal.

Claim 3: “Rappler…is an American CIA-funded news agency…. They have not paid their taxes and we are questioning them because media must be 100% owned by the country, the Philippines.”

Rappler is 100% Filipino-owned, and the CIA is not one of its funders. (READ: Debunking lies about Rappler)

Meanwhile, as of 2019, the Philippine government has filed 11 cases against Rappler, its chief executive officer Maria Ressa, and its reporters in a span of 14 months. Ressa has posted bail 8 times and arrested twice.

Rappler maintains the Duterte administration’s cases against it is a “clear form of continuing intimidation and harassment against us, and an attempt to silence journalists.”

“Your recent absence during the Taal Volcano eruption…. Are you still fit to be president?”

President Rodrigo Duterte was asked this question by a Russian television network in a taped interview aired on Friday, January 24.

Instead of addressing the issue, the President went into a rant against the media, particularly Rappler. He cited recycled accusations of foreign ownership and tax liabilities – the subjects of cases filed by his government and which Rappler, to this day, is fighting in various courts.

Yet, he couldn’t cite a single instance when we reported him missing from the national government’s response to the disaster. Because we never did.