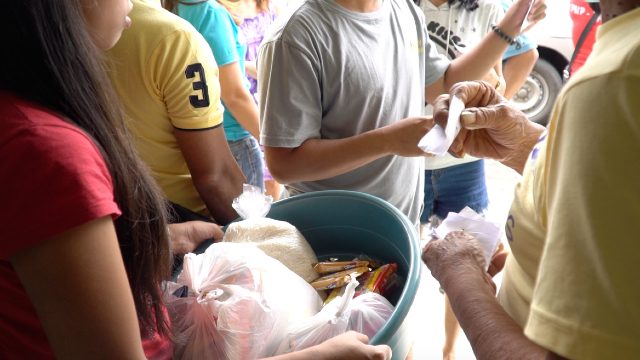 BATANGAS, Philippines – A village in Santo Tomas, Batangas is not operating an evacuation center, but there are over 500 evacuees seeking shelter there for two weeks now.

Cherryl Lazara, 37, evacuated from her home in Talisay on January 12, following the Taal Volcano eruption. She sought refuge from the wrath of Taal, and headed straight to her relatives living at Barangay San Luis in Santo Tomas, roughly 26 kilometers away.

On that evening, Lazara said that at least 8 other families took shelter at their relative’s home. Now, 3 families have moved out of their temporary home.

(We’re hoping that all the evacuees will be given help to start anew, especially those who are not staying in evacuation centers.)

Lazara said she was thankful of Barangay San Luis officials, who accommodated evacuees even if they don’t reside in the village.

(In our own village, we didn’t feel the presence of our officials [in Talisay], but this barangay – I couldn’t understand, that even if we’re not from here, they still accepted us.) Lazara’s family is just among the 38,102 families who opted to stay out of crowded evacuation centers following the Taal Volcano eruption.

In San Luis, there are 154 families, or 566 persons, who either have relatives in the village or simply went there because the evacuation centers were just too full to accommodate them.

San Luis barangay councilor Dominador Celis Jr said that they are willing to help the evacuees as long as they can, but acknowledged that they may not be able to do so in the long run.

(We don’t know how long we’ll have to watch Taal Volcano. But because a lot of people have already helped us, donations might be harder to come by in the next days.)

That meant 70% of the P175,000 should go to pre-disaster purchases, or P122,500, which Celis admitted is not even enough to buy equipment for their village. The remaining P52,500 is for the quick response fund, which they could not access because San Luis is not under a state of calamity.

The barangay simply does not have enough funds to provide aid to the evacuees in the long run.

(We haven’t received help from Santo Tomas CDRRMO. From Day 1, the relief goods we’re giving to evacuees have come from private groups and individuals.)

Celis added that the local government, where the evacuees are from, had not provided aid for their residents in San Luis yet.

Taal Volcano is still on Alert Level 4, as state volcanologists said that a major explosion can still happen within “hours, days, or weeks.” (READ: Calabarzon residents have no management plan for volcanic eruptions – survey)

With at least 11 towns surrounding Taal Volcano on total lockdown and the threat of a hazardous eruption is still imminent, evacuees are not certain when they can go back to their homes.