‘Under the weather’: Duterte’s Q and A with Panelo postponed again 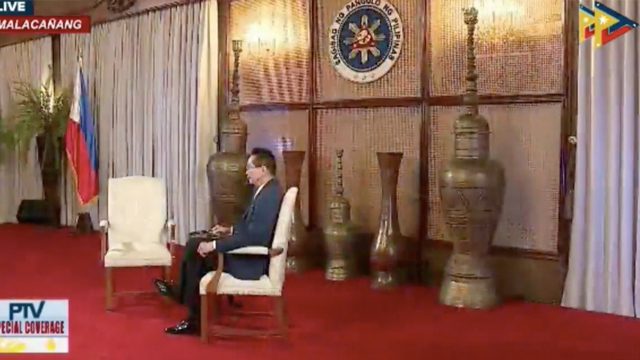 More than an hour past the scheduled start of the interview, Panelo announced on television that Duterte was feeling “under the weather” due to several meetings held on Monday, January 27.

Panelo, who sat onstage across an empty chair, added that the interview may instead take place “perhaps next week.”

“Good evening, televiewers and our countrymen. We are sorry that you had to wait for some time for this tête-à-tête with the President. However, the President is presently under the weather. He had several meetings yesterday and he had to pore [over] many documents, hence he doesn’t feel well today,” Panelo said past 6:30 pm.

Tuesday’s interview was originally scheduled at 5 pm, then later moved to 6 pm before it was canceled altogether.

Duterte’s question and answer with Panelo was first postponed last Wednesday, January 22. Malacañang announced the President had “pressing matters” to attend to at the time.

During an earlier press briefing with reporters on Tuesday, Panelo said his interview with Duterte was supposed to touch on issues such as the President’s threat to scrap the Visiting Forces Agreement with the United States, latest developments on response for those affected by the Taal Volcano eruption, and the novel coronavirus scare.

Promising a wide-ranging discussion on issues of “national concern and national interest,” Malacañang had advertised the interview as a sequel to Duterte and Panelo’s tête-à-tête held in September 2018. – Rappler.com