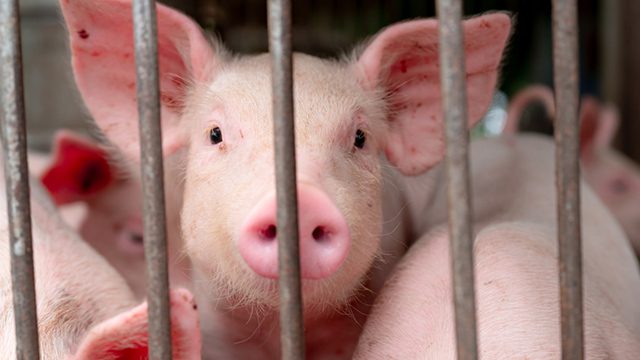 Facebook Twitter Copy URL
Copied
The villages of Lamanan and Dominga in Calinan, Davao City are also on lockdown to limit the spread of the disease

MANILA, Philippines – Two villages in Calinan, Davao City have been placed under a state of calamity over the spread the African swine fever (ASF) virus, the Calinan Sangguniang Panlungsod said on Friday, February 7.

Councilor Bai Hundra Cassandra Advincula said the barangays of Lamanan and Dominga were the villages included in the measure and that with the declaration, the city government will be assist the affected hog raisers through its Quick Response Fund.

“The City Veterinarian’s Office (CVO) will immediately give them assistance,” Advincula said.

Affected hog raisers were set to receive P5,000 or P90 per kilo for their pigs, whichever was higher. Advincula said the piglets were originally priced at P1,500 per head.

Over 3,000 pigs were expected to be culled to ensure that the ASF disease would not spread to other areas.

Aside from this, a lockdown was likewise put in place to limit the spread of the disease.

The Department of Agriculture earlier confirmed the ASF virus continued to spread in the Davao region, reaching the outskirts of Davao City.

Despite this, the city remained on lockdown while live hogs and pork-related products were not allowed to enter.

In Koronadal City, Agriculture Secretary William Dar confirmed on Friday, February 7, said that 11 of the more than 40 hogs that were culled from a hog farm tested positive for ASF. The hogs had come from an auction site in Sulop, Davao del Sur, which had since been closed down in the aftermath of the ASF outbreak in Davao Occidental.

Despite this, Dar gave assurances the virus had been contained in Koronadal after the culling of affected hogs.

In Don Marcelino, Davao Occidental, nearly 3,600 pigs had been culled. Don Marcelimo was where the ASF was first detected in Mindanao. – Rappler.com