Taiwan covered by travel ban due to novel coronavirus – DOH

Feb 10, 2020 7:35 PM PHT
Janella Paris
Facebook Twitter Copy URL
Copied
Health Undersecretary Eric Domingo says Taiwan is included in the ban because the World Health Organization recognizes it as part of China and the Philippines has a One-China policy 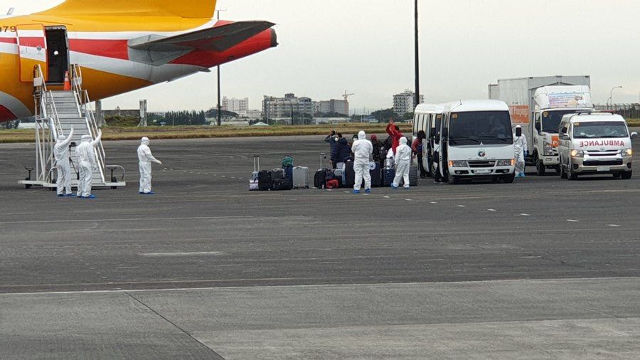 MANILA, Philippines – Taiwan is covered by the temporary travel ban imposed by the Philippines on mainland China and its special administrative regions due to prevent the spread of the coronavirus, the Department of Health (DOH) clarified on Monday, February 10, ending last week’s confusion on the extent of the ban.

According to Health Undersecretary Eric Domingo, Taiwan is included in the ban because the World Health Organization (WHO) recognizes it as part of China.

“If you look at the WHO map and the number of cases that they have, Taiwan is included in China. Since we have a temporary travel restriction and ban on China, then Taiwan is included,” Domingo said in a press briefing.

“I think the Department of Foreign Affairs (DFA) has made it clear to us that we have a One-China policy,” he also said. The said policy is enclosed in the 1975 Joint Communique between the Chinese and Philippine governments, which “respects the position of the Chinese Government that there is but one China and that Taiwan is an integral part of Chinese territory.”

Domingo also said that Taiwan has always been included in the expanded travel ban ordered by President Rodrigo Duterte to quell the spread of the 2019 novel coronavirus (2019-nCoV).

Malacañang made the announcement on February 2, after the Philippines announced its first 2019-nCoV death. The President then approved “temporarily banning the entry of any person, regardless of nationality, directly coming from China and its Special Administrative Regions.”

Despite Taiwan not being mentioned in the February 2 announcement, the health official said, “As of now, as part of the restriction to China, Taiwan is included.”

But he admitted that the inclusion of Taiwan in the expanded ban was not immediately implemented because of “confusion” among involved agencies. Domingo said that the Philippines only started putting restrictions on travelers from Taiwan over the weekend.

The Inter-Agency Task Force for the Management of Emerging Infectious Diseases led by the DOH is set to meet on Wednesday, February 12, to discuss whether or not Taiwan can be excluded from the ban. According to Domingo, Taiwan has contested its inclusion in the travel restrictions.

Taiwan’s inclusion in the ban means non-Filipino citizens traveling from the East Asian state will be denied entry into the Philippines. Only Filipino citizens and permanent resident visa holders will be allowed to enter, and even then they will be subject to a mandatory 14-day quarantined following DOH guidelines.

It also means Filipinos are not allowed to travel to any of the places indicated in the ban. Labor Secretary Silvestre Bello III said in a February 10 Malacañang press briefing that there are at least 120,000 overseas Filipino workers in Taiwan who stand to be affected by the decision.

So far, the Philippines has 3 confirmed cases of the novel coronavirus. They are imported cases, the patients having traveled from China. One of them died while the other two have since recovered from the infection after testing negative for the virus.

As of Monday noon, the novel coronavirus has killed 910 people and infected over 40,500 people worldwide. – Rappler.com