Feb 10, 2020 11:34 PM PHT
JC Gotinga
Facebook Twitter Copy URL
Copied
Senators say they should first review the ramifications of withdrawing from the agreement that allows for the presence of US military troops in the Philippines 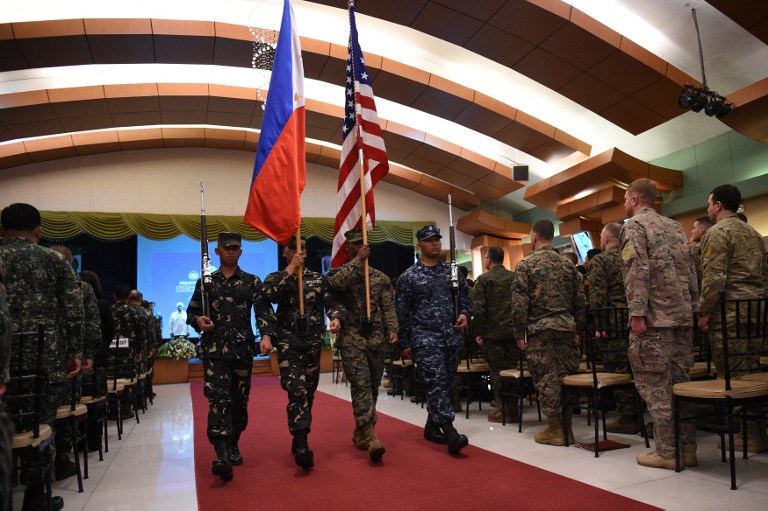 MANILA, Philippines – The Senate on Monday, February 10, adopted a resolution urging President Rodrigo Duterte to reconsider his order to scrap the Visiting Forces Agreement (VFA), that provides a legal framework for the presence of US military troops in the Philippines.

With Senate Resolution No. 321, the lawmakers called on Duterte to hold off terminating the agreement while they conduct a “thorough review.” Withdrawing from the VFA must be “reviewed seriously” to make sure it would not affect the security and economy of the Philippines and other countries in the Asia Pacific, they added.

“Fully recognizing the authority of the Chief Executive and without intending to disrespect a co-equal body, prior to unilaterally terminating the VFA, the Senate should be given the opportunity to conduct a review and assessment of the impact of the withdrawal on the country’s security and economy, specifically with regard to intelligence information sharing, military aid, and financing and technical assistance extended by the US relative to the continuing threats posed by domestic and foreign terrorist groups, and ultimately to the stability and security in the Asia Pacific region,” said the resolution introduced by Senate President Vicente “Tito” Sotto III, Senate Minority Leader Franklin Drilon, and Senator Panfilo Lacson.

Only Senator Ronald “Bato” dela Rosa abstained from voting on the resolution. It was after the cancellation of Dela Rosa’s US visa that Duterte ordered to end the VFA on January 23.

It appears Dela Rosa’s visa was cancelled as a sanction included in the US Senate’s application of the Global Magnitsky Act to operators of Duterte’s violent “war on drugs.” Dela Rosa was Duterte’s first police chief.

Duterte stated a number of times in public his intention to break the pact with the US, and on Friday, February 7, his spokesman Salvador Panelo told reporters in a message that the President was instructing Executive Secretary Salvador Medialdea to tell Foreign Secretary Teodoro Locsin Jr to send a notice of the VFA’s termination to the US government.

However, on Saturday, February 8, Medialdea and Defense Secretary Delfin Lorenzana told reporters that no such order had been issued yet.

Locsin and Lorenzana told the Senate in a hearing on the VFA on Thursday, February 6, that the Philippines has been benefitting from the agreement.

The foreign secretary recommended a “vigorous review” of the VFA, not its termination.

In the resolution, its sponsor Senator Aquilino “Koko” Pimentel III echoed Locsin’s statement that “the termination of the VFA must be weighed in terms of the overall interest of the country.”

“In a developing country like ours, it is more beneficial and prudent to maintain if not gain allies than to challenge our status quo. Our country is currently benefitting from our partner states which include the US,” Sotto said.

“It is my view that the better way to go is to review the agreement and ask the executive department to reconsider its intent of abrogation while the Senate, who is a partner in this agreement, is reviewing it,” the senate president added.

Meanwhile, Drilon moved to include Senate Resolution No. 305, “expressing the sense of the Senate that termination or withdrawal from treaties and international agreements concurred in by the Senate shall be valid and effective only upon concurrence by the Senate,” as in the case of the VFA.

Hinged upon the 1951 Mutual Defense Treaty (MDT) between the Philippines and the US, the VFA was ratified by the Senate in May 1999. It provides legal cover for US troops’ entry into the Philippines, and allows for joint military cooperation, exercises, trainings, and other engagements.

Intelligence and surveillance assistance from US military troops in the Philippines proved crucial in retaking the besieged city of Marawi from the Maute terror group in 2017, both Philippine and US officials earlier said. US troops were also among the first responders in the aftermath of Supertyphoon Yolanda (Haiyan) in 2013. (READ: With VFA uncertain, US envoy hails military alliance with PH at WW2 event)

Lawmakers and analysts pointed out that the VFA gives flesh to the MDT, which was reaffirmed in 2019 by US Secretary of State Mike Pompeo as including the South China Sea, the Philippine portion of which is locally termed as the West Philippine Sea.

The alliance with the US and the rotational presence of US naval forces serves as a deterrent against China’s aggression in the West Philippine Sea, Locsin said.

A notice of termination of the VFA is ready, according to Locsin, who said he would only send it to his US counterparts upon direct orders from Duterte.

The termination becomes effective 180 days upon the US’ receipt of the notice. – Rappler.com