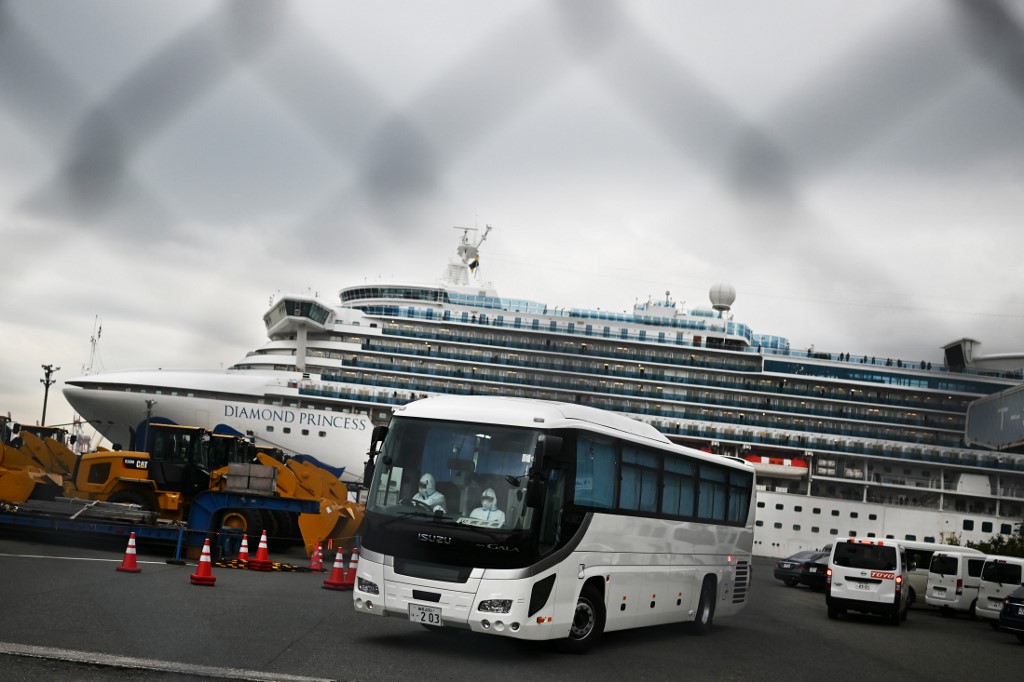 MANILA, Philippines – The scores of Filipino passengers and crew members of Japanese cruise ship Diamond Princess who were infected by the novel coronavirus (2019-nCoV) will not be among those to be repatriated to the Philippines on Sunday, February 23.

Department of Health (DOH) Assistant Secretary Maria Rosario Vergeire said they received a report as of Friday morning, February 21, that 52 Filipinos aboard the ship have already tested positive with 2019-nCoV, after 8 new cases were recorded. But she clarified the DOH was still “verifying” the latest figure.

“At gaya po ng ating napag-usapan at napagkasunduan namin [sa Inter-Agency Task Force (IATF)] na wala hong sasama sa repatriation na may sintomas (And just like what we discussed and agreed upon in the Inter-Agency Task Force, none of those who showed symptoms will be repatriated yet),” Vergeire said in a press conference on Friday afternoon.

The DOH official said the IATF handling the coronavirus scare is yet to finalize plans for these 52 Filipinos, but she promised they will “not be left behind.”

“Paguusapan po uli yan sa Inter-Agency Task Force. But as we have heard from the President [Rodrigo Duterte] and even our Secretary [Francisco Duque III], sinasabi lagi no Filipino o wala tayong kababayan na iiwanan. We will not be leaving them behind,” Vergeire said.

(The Inter-Agency Task Force will still have to talk about that. But as we have heard from the President Rodrigo Duterte and even our Secretary Francisco Duque III, they always say no Filipino will be left behind.)

She said that because the 52 cases tested positive for COVID-19 – the disease caused by 2019-nCoV – on different days, there would be separate individual arrangements for their logistical needs. These include different days of stay in the hospital, of discharge, and trips back to the Philippines as well.

About 460 to 480 Filipino passengers and crew members of Diamond Princess are set to be repatriated on Sunday from Yokohama, Japan to New Clark City in Capas, Tarlac, the Philippine government’s designated quarantine facility for COVID-19.

The IATF agreed that the DOH and the Magsaysay Maritime Corporation, the employer of the Filipino crew members, will both primarily shoulder the expenses for the repatriation process.

The DOH will be deploying health personnel to watch over the quarantined Filipinos and will also pay for the costs of their transportation to New Clark City as well as the on-site medical needs of the repatriates, hospitalization expenses through Philhealth, and personal protective equipment (PPE) for the first 5 days of the quarantine period.

The Magsaysay Maritime Corporation, meanwhile, will bear the cost of all transportation expenses of the repatriates from Japan until the completion of the quarantine period, PPE for the remaining period of the quarantine, as well as, food, lodging, personal hygiene kits and disinfectants, waste disposal services, and other incidental expenses of the repatriated crew.

The Department of Transportation will be tasked to bring the repatriates from Haribon Airport in Pampanga to New Clark City in Tarlac. The Overseas Workers Welfare Administration will provide livelihood packages to the repatriates and also pay for their transportation from Manila to their respective destinations after the quarantine period.

Vergeire said the hundreds of repatriates from Diamond Princess are currently being checked for possible COVID-19 symptoms.

Medical teams from the DOH will also test them before they leave the cruise ship and right after they disembark from the two planes that will take them back to the Philippines.

Just like the 30 overseas Filipino workers repatriated from Wuhan, China – the epicenter of the COVID-19 outbreak – the second batch of quarantined Filipinos would be subjected to twice-a-day monitoring during their 14-day quarantine at New Clark City.

As of Friday, the DOH has probed 597 patients in the Philippines for possible COVID-19 infection. Of this number, 139 patients are still admitted in various health facilities nationwide, while 455 have already been discharged.

The Philippines has, so far, recorded 3 confirmed cases of COVID-19. One of them died, but the other two recovered and have since been discharged from the hospital.