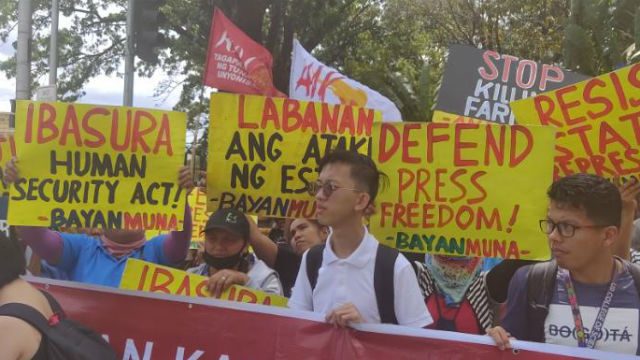 MANILA, Philippines – National Union of Peoples’ Lawyers chair Neri Colmenares said the controversial anti-terrorism bill being pushed in the House of Representatives was essentially designed to target dissenters, not terrorists.

In a joint House hearing on Tuesday, March 3, Colmenares said the “vague” provisions in the still-unnumbered bill consolidating all measures seeking to amend the Human Security Act (HSA) of 2007 are “unconstitutional” and trample on the rights of those who are critical of the government.

(This isn’t really to go after the Abu Sayyaf or terrorists, or whoever they call as terrorists… I think the reason they actually need this bill is for the dissenters, the opposition.)

He zeroed in on Section 4 of the bill, which would consider the following as terrorist acts:

Colmenares said threatening to commit an act is not synonymous to actually doing it.

“[The] threat to commit all of the above can be declared unconstitutional because it’s vague and does not provide a standard,” the lawyer and former Bayan Muna congressman said.

He also said Section 27 of the anti-terrorism bill would give law enforcement agencies up to 30 days to deliver a suspected person to court. But under the Constitution, a person arrested even during the suspension of the privilege of the writ or the protection from warrantless arrests must already be judicially charged within 3 days.

“How can a law allow something which the Constitution prohibits?” asked Colmenares

Section 31 of the anti-terrorism bill would also “upon application by the prosecutor… limit the right to travel of the accused to within the municipality or city where he resides or where the case is pending.

But Colmenares said the way this provision was phrased removes the discretion on the judge whether or not to limit the travel of the accused.

Muntinlupa Representative Ruffy Biazon, a primary author of the anti-terrorism bill, is unfazed. He said only the Supreme Court gets to say whether the proposed measure is legal.

“Coming from both sides, proponents may say that one item is not unconstitutional and another side would say it is unconstitutional. But the bottomline is, it is only the Supreme Court that can declare anything as unconstititonal,” Biazon said.

“So I don’t think we should be bogged down by discisssions if whether a point is uncsontititonal or not because it is not in our hands to determine that. We can all put up our own positions, but ultimately it is only the Supreme Court [that decides on that],” he added.

The Senate already approved its version of the anti-terrorism bill on February 26. Unlike the House version that only wants to amend HSA, Senate Bill No. 1083 wants to repeal the HSA and replace it with a new law. – Rappler.com