ROUNDTABLE: Women take charge in the House of Representatives 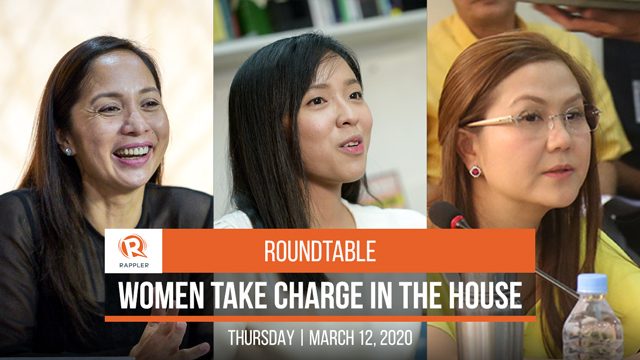 MANILA, Philippines – In the macho world of the House of Representatives, female legislators are unafraid to speak up.

They fiercely push for legislation protecting the rights of the Filipina, from putting more teeth into the Anti-Violence Against Women and Children Act to criminalizing the practice of early and forced marriages. Congresswomen also hold key positions in the House – 4 are deputy speakers and 22 are committee chairpersons. (READ: [OPINION] Women in legislature: Do they really matter?)

Yet they are still far outnumbered by congressmen, as the World Economic Forum noted that female representation in Congress stood at only 28% in early 2019. (READ: Philippines drops to No. 16 in Gender Gap Report 2020)

Lady lawmakers also need to navigate the male-dominated political arena in the Philippines, where President Rodrigo Duterte himself is notorious for rape jokes and sexist remarks about women.

As the world observes Women’s Month, Rappler will sit down with 3 influential congresswomen at 2 pm on Thursday, March 12, to discuss the crucial role that women play in governance and how it’s like to be a female leader under Duterte.

Joining our panel are:

The roundtable discussion will be moderated by Mara Cepeda, Rappler reporter covering the House of Representatives.

Bookmark this page to watch the live stream of the discussion. – Rappler.com