Aileen Baviera, 60: Her eyes were on China, her heart stayed with PH 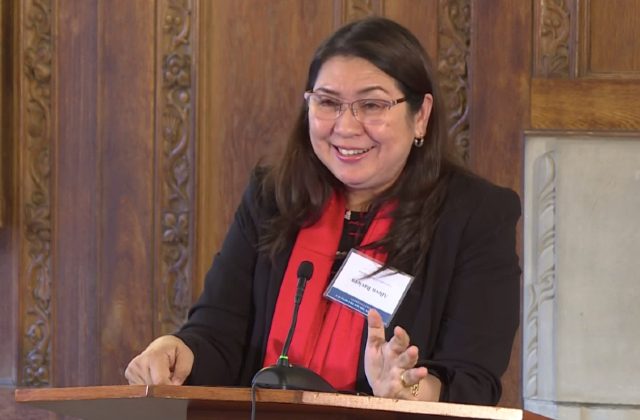 Facebook Twitter Copy URL
Copied
‘If one has to take a side, one must take the side of the Filipino people,’ says China expert Aileen Baviera, who died due to the novel coronavirus at age 60

MANILA, Philippines – “Take care, bring a small hand sanitizer in your purse, and wear a mask at the airport.”

Teresita Ang-See recalled that this was her last message to Aileen Baviera, 60, who was on her way home from Paris on March 12.

Ang-See said Baviera was at a convention in Paris, where a Filipino was a guest speaker. When the Filipino got sick and tested positive for the novel coronavirus, Ang-See said organizers sent the participants back home. Baviera was one of them.

Baviera informed her friends, including Ang-See, about the situation. That was the last time they spoke.

Baviera, one of the Philippines’ leading experts on China, died at 3:55 am on Saturday, March 21, due to the novel coronavirus that originated in the Chinese province of Hubei. At the time she died, the Philippines had 230 cases of the coronavirus, including 18 deaths.

“We have been working so hard the last 6 days to help in this fight against COVID-19. I couldn’t help crying to know that while we were so busy yesterday, putting together 150 boxes of medical supplies, she was fighting for her life,” Ang-See, herself a China expert, said on Saturday.

But what made Baviera’s friends even more emotional was the way she lived – and loved her country.

For 40 years, her eyes as an expert were focused on China. But till she died at the age of 60 due to a pandemic, her heart stayed with the Philippines.

An Iskolar ng Bayan (“Scholar of the Nation,” as students of the University of the Philippines are called) from college to MA to PhD, she is best remembered as an expert who studied China for the sake of the Philippines.

“If one has to take a side, one must take the side of the Filipino people,” Baviera wrote in a 2019 essay to mark her 40th year as a China expert.

Born on August 26, 1959, Baviera started studying contemporary China at the age of 20. From 1981 to 1983, she studied in China as an exchange scholar of the Chinese government. She learned the Chinese language, traveled the country extensively, and encountered its people, “from the hot deserts in Xinjiang and Gansu to the grasslands of Inner Mongolia to icy Harbin and Heilongjiang.”

“More than taking me places, these travels took me to the people: fellow travelers on a train asking me if I were an Uyghur because they hadn’t yet seen one, a lily-footed grandma skillfully scaling the steps of a mountain trail while I huffed and puffed my way up, a village circus troupe performing all muddied and ragged in a park, a young Mongolian woman making cheese from horse’s milk,” Baviera wrote.

Baviera studied Mao Zedong at the same time that Ferdinand Marcos was pillaging the Philippines. “It also didn’t take too long before I learned to recognize and shun the shallowness of political propaganda when I saw it, Mao’s as much as Marcos’.”

Baviera added that the Tiananmen Square tragedy of 1989, where hundreds of pro-democracy protesters were massacred by Chinese troops, was a watershed moment in her China-watching.

“The rose-tinted glasses came off; but even the large dose of cynicism that replaced it was soon moderated by grudging respect and admiration for how quickly these people bounced out of political crisis to eventually transform China into an economic juggernaut. There was still much that could be learned from and about China, so I remained an avid watcher,” said Baviera.

Drawing from her experience, Baviera advised young China watchers: “Do not be emotionally invested in the subject of your study; you should try to maintain objectivity at all times, which can be quite difficult given the state of ties today.”

She added: “Recognize that China is complex and has multiple facets; it is not unidimensional and not always clear as day. Chinese society is old and it is new. There is the State, and there is the 1.4 billion thinking, breathing, living people. Simplistic thinking will not do. In the end, Deng Xiaoping’s cat was neither black nor white; it is grey.”

Baviera’s accomplishments include leading the University of the Philippines (UP) Asian Studies Center as its dean from 2003 to 2009, and heading the Asia-Pacific Pathways to Progress Foundation, which aims to promote peace and understanding among Filipinos and other peoples of the Asia-Pacific.

Chito Santa Romana, the Philippines’ ambassador to China, remembers Baviera for her objectivity in analyzing Beijing.

Santa Romana had known Baviera since the early 1980s, when she was studying at Peking University. The ambassador himself is a veteran China watcher, an Emmy award-winning journalist and former Beijing bureau chief of ABC News, who worked as producer and reporter in China for two decades.

“Dr Aileen Baviera was a close friend and colleague. I will miss her scholarly wisdom and collegial advice. We had intensive discussions about China and Philippines-China relations, and we exchanged many observations and ideas,” Santa Romana said.

“Her insightful writings and talks constitute a lasting legacy of her influential ideas and policy advice. She will be remembered for her scholarship and objective analysis,” said Santa Romana.

The ambassador added that Baviera was “a passionate advocate of scholarly dialogues and engagement as part of people-to-people exchanges and ‘track two’ or nongovernmental diplomacy.”

In fact, in 2013, after the Scarborough Shoal standoff that brought Philippines-China relations to new lows, Baviera invited Santa Romana to join her academic delegation that flew to China. There, he said, they engaged in “frank but friendly discussions” with Chinese researchers on the way forward.

“She was gregarious, and made a lot of friends among Chinese and overseas students. She adapted well to the relatively Spartan life of students like us,” FlorCruz told Rappler.

FlorCruz said Baviera was curious and diligent, conducting interviews and traveling as much as she could. “As a scholar, she was rigorous and yet humble in her research. She acknowledged what she did not know or understood – and single-mindedly looked for answers,” he said.

FlorCruz also said Baviera “was always ready to help or share her insights and research materials,” and that “she spoke softly and calmly but she was firm and thoughtful on controversial issues.”

“We lost a pillar of China studies in the Philippines,” FlorCruz said.

Jay Batongbacal, one of the Philippines’ leading experts on the South China Sea, also deeply admires Baviera, with whom he worked on maritime and foreign policy issues for more than two decades.

Batongbacal said it was Baviera who recruited him back into UP as he was finishing his doctorate. He was with the UP Asian Center for a number of years while Baviera was dean, before he transferred to law.

Batongbacal is now director of the UP Institute for Maritime Affairs and the Law of the Sea.

“She was probably the only who could truly understand China in this changing world, unlike the old guard who romanticized China, or the new scholars who either idolized or feared it. She was able to see and point to the truth that was often in between,” Batongbacal said. “She was the quintessential scholar, mentor, and friend.” – Rappler.com