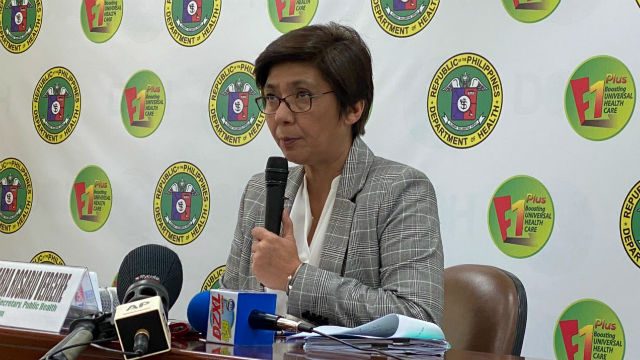 Facebook Twitter Copy URL
Copied
With the arrival of 100,000 test kits donated by other countries, the DOH says the next few days would see the 'true' increase of confirmed coronavirus cases

MANILA, Philippines – The Department of Health (DOH) said Saturday, March 21, that the Philippines still would not implement mass testing for the novel coronavirus, even as the country receives 100,000 new test kits donated by China, South Korea, and Brunei.

Health Undersecretary Maria Rosario Vergeire said in a briefing Saturday afternoon that testing will still be limited to severe or vulnerable Persons Under Investigation (PUIs).

(While we’re still finalizing our system, we will have to test the most vulnerable first for now, they are the elderly, with pre-existing ailments and underlying condiitons, and high-risk pregnant women.)

PUIs with severe symptoms are also considered high priority, according to Vergeire.

Vergeire said the Philippines’ average testing capacity is 950 to 1,000 tests per day, with the bulk coming from the Research Institute for Tropical Medicine, which is averaging 600 tests per day.

(Our current supply of testing kits may be sufficient for our countrymen at this time.)

As of March 21, the confirmed cases of the coronavirus in the Philippines rose to 307, with a single-day increase of 77. The number of deaths is at 19.

Vergeire was asked whether the deaths are due to the non-implementation of mass testing.

(That’s not true, the people who died went to the hospital and we can see that they have a common denominator or factor in their profiles, and these are those with underlying conditions or the elderly.)

Vergeire said when there are more testing kits, they will reassess whether to increase testing capacity to go beyond severe cases.

Vergeire said that the addition of 100,000 kits would mean the next few days will see the “true” increase of cases.

Vergeire said this will help the DOH spot patterns.

(In the next day we will see the true increase in cases. If there are days with high increase or days with low increase, and the behavior of the increases per day.)

The University of the Philippines or UP-developed testing kits, which are cheaper and can turn in results faster, is still in the process of validation which could take 2-3 more weeks, according to Vergeire. The health official said that after validation, it would still have to obtain a certificate of product registration (CPR) from the Food and Drug Administration (FDA). – Rappler.com