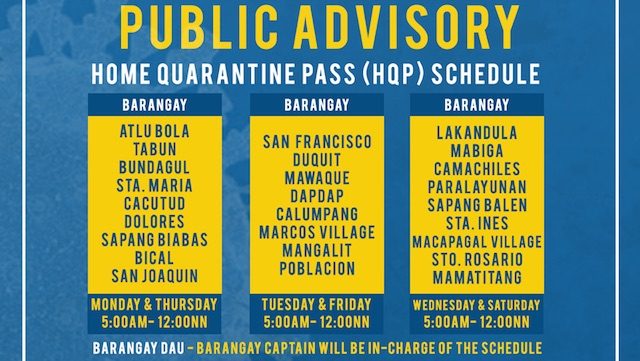 PAMPANGA, Philippines – The Mabalacat City government announced on Monday night, March 23, a “24-hour curfew” that set different schedules for residents of its 27 barangays to go out for groceries.

The curfew limited the grocery runs of its residents to a fixed schedule. Only persons with Home Quarantine Pass (HQP) from their respective barangays are allowed to go out.

Mabalacat City Mayor Crisostomo Garbo told Rappler the restrictions were based on a provincial ordinance. “It is an Ordinance from the Province that is why we should follow,” he said.

Pampanga provincial administrator Charlie Chua said Governor Dennis Pineda did not issue any directive or executive order placing any area of the province under a “24-hour curfew” but he said Malacañang’s order to place Luzon in lockdown “technically” has the same effect.

Chua said the governor did not use a power the Sangguniang Panlalawigan earlier granted him to impose curfew. But he said Malacañang curfew supersedes all curfew orders.

There were residents who complained that they have not received passes from their barangays. Garbo told them to wait for the barangay captains to issue them and explain the new restrictions.

“I’ll simplify it. Do not go out if it is not important like buying essential goods such as food and medicine. But only one member of a family will be named in the quarantine pass that they will give you. The only ones exempted [from this] are those whose jobs are approved by the DTI (Department of Trade and Industry],” the mayor said.

“So starting tomorrow, if you get out, the police may warn you or send you home. Second offense, you may be charged,” the mayor said.

The national government’s COVID-19 Inter-agency Task Force did not prescribe window hours for Luzon residents to go out of their homes for necessities.

Other towns and cities have imposed different curfews.

Pampanga was placed under state of calamity on March 16 after it confirmed positive cases of coronavirus among its residents.

The country’s confirmed cases of coronavirus rose to 501 by Tuesday morning, March 24, including 33 deaths and 19 recoveries.