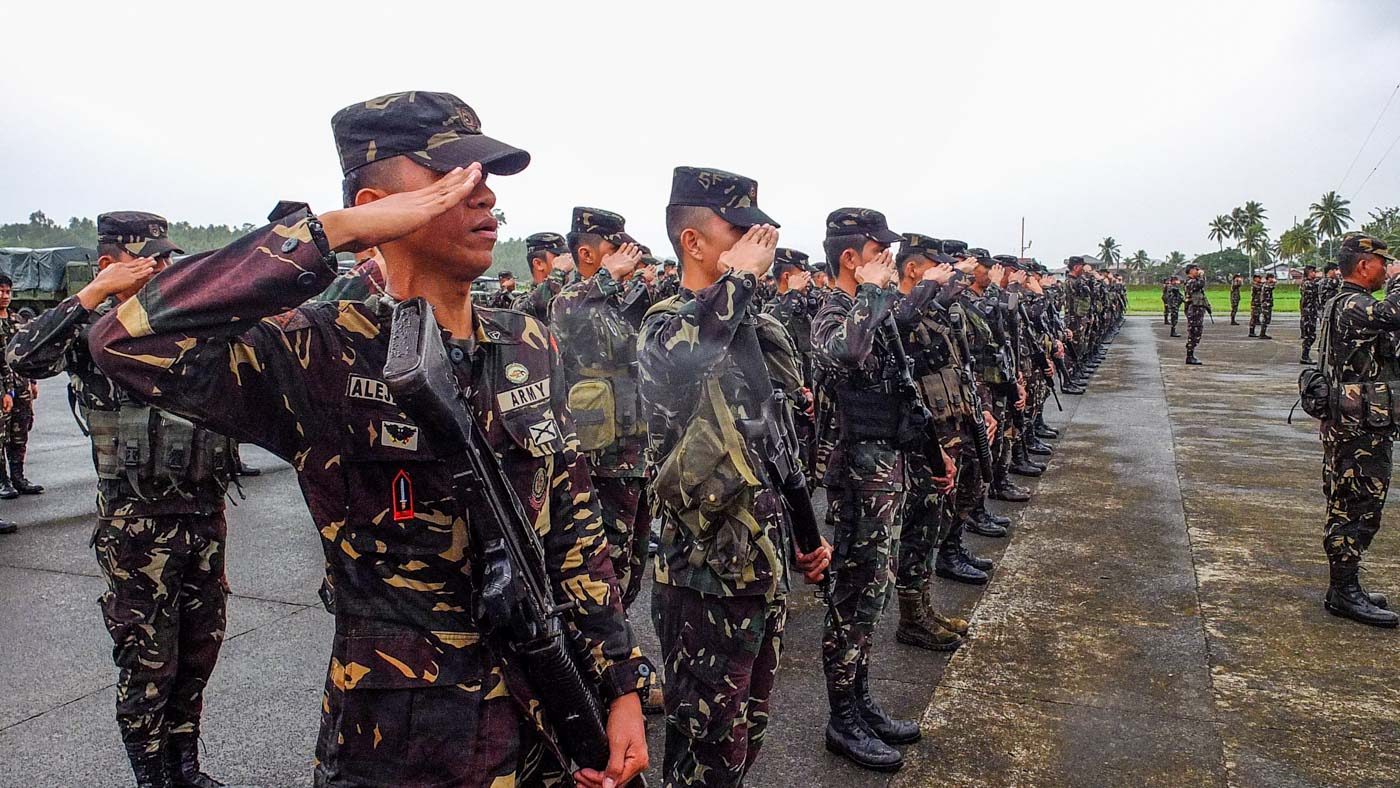 MANILA, Philippines – A senior military officer and his wife have tested positive and are being treated for the novel coronavirus, Armed Forces of the Philippines (AFP) chief of staff General Felimon Santos Jr said in a statement to reporters on Tuesday, March 24.

Santos himself is under home quarantine because he had come into contact with the infected officer, he said.

The said officer has “a history of foreign travel.” He and his wife were admitted to the AFP Medical Center in Quezon City on March 15 as persons under investigation (PUI) for the coronavirus.

The couple have been undergoing “proper medical management,” and the officer is now asymptomatic, Santos said. He declined to identify the officer to the media.

The military chief, meanwhile, said he was working from his quarters in the AFP General Headquarters, Camp Aguinaldo in Quezon City. (READ: Distrust on both sides as government starts ceasefire with communist rebels)

Although he did attend a conference with the infected officer, Santos said they were already practicing physical distancing at the time, and he did not come within one meter of the patient then.

Santos put himself in quarantine “just to make sure, and undergo the protocol for the safety of everyone,” he said, adding that personnel at headquarters have observed a “no touch” protocol since the local outbreak of the virus began in late January.

Santos said he is physically well, and not experiencing any symptom of infection.

Camp Aguinaldo is under strict measures to protect its military and civilian personnel from the virus, Santos said.

Since Metro Manila went on lockdown or “community quarantine” on March 15, only two of the camp’s 6 gates have been opened to better monitor the movement of people. More officers with thermal scanners have been assigned to check people’s body temperature at entry and exit points.

The AFP’s Commissioned Officers’ Club, which has a café and restaurant, is temporarily closed. The Soldier’s Mall, which has stores and eateries, remains open.

The camp’s golf course, the AFP Finance Center, and other financial establishments within the camp are also temporarily shut.

Religious services in the camps’ chapels and prayer halls are closed to the public but are broadcast live by the Civil Relations Service, AFP.

The Office of the Deputy Chief of Staff for Personnel, J1, has allowed civilian employees to work from home, but military personnel remain in camp as they are on call. (READ: Joma Sison takes cue from UN, calls for ceasefire with government)

Military contingents have been deployed to checkpoints to assist the police in enforcing the “enhanced community quarantine” or lockdown of Metro Manila, the rest of Luzon, and other parts of the Philippines.

For this, the Office of the Deputy Chief of Staff for Logistics, J4, provides important equipment and supplies for soldiers on duty, Santos said.

A Military Treatment Facility has been opened in Camp Aguinaldo to cater specifically to AFP personnel manifesting symptoms of the coronavirus disease or COVID-19.

Personnel from the General Headquarters Support Command and the station hospital have been conducting an information drive for the camp’s residents, urging them to take precautions agains the virus.

“Protocols from the Department of Health…[are] being strictly implemented, including intensified contact tracing to ensure the safety of military and civilian personnel in the General Headquarters,” Santos said.

Besides checkpoint duty, the military’s different service branches – the Army, Navy, and Air Force – have deployed vehicles and other assets to assist essential workers in their commute, and to transport medical supplies, equipment, and relief items to areas on lockdown.

The Philippines has recorded 552 confirmed cases of the virus, with 20 recoveries and 35 deaths as of Tuesday morning. – Rappler.com