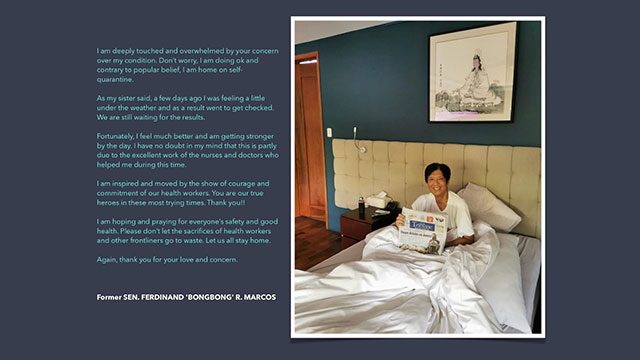 Past 1:30 pm, Thursday, March 26, a sickly-looking Bongbong Marcos released a statement to counter rumors spreading on social media that he is already intubated in a hospital after acquiring the fast-spreading disease.

He said he was “deeply touched and overwhelmed” by people’s “concern” over his condition.

“Don’t worry, I am doing okay and contrary to popular belief, I am on self-quarantine. As my sister said, a few days ago I was feeling a little under the weather and as a result went to get checked. We are still waiting for the results,” Bongbong Marcos said.

In the photo that accompanied his statement, the only son and namesake of the late dictator Ferdinand Marcos looked frail as he sat on his bed while holding a copy of The Daily Tribune issue released on Thursday.

Bongbong Marcos’ spokesperson Vic Rodriguez, however, did not comment when asked by Rappler to confirm a supposed statement released by his client’s wife Louise Araneta Marcos, who allegedly said their entire family and staff also got tested for COVID-19 and received their negative results already.

Rodriguez also did not reply when pressed further by Rappler if Bongbong Marcos’ family already got tested for COVID-19.

The senator told PTV-4 her brother is “unwell” and is currently resting at home. But she confirmed that he already got swabbed and is waiting for the results of his COVID-19 test. (READ: When should you get tested for coronavirus?)

(We haven’t seen each other yet. I think he just came from Spain last week. He wasn’t feeling well so he headed straight home; he said he wasn’t made to go on quarantine. He then got tested after a few days because it seemed he was getting worse, but the results aren’t out yet.)

Still, she said her brother’s condition seems to be improving.

(He says he feels lousy, but he has been eating fruit. He seemed okay yesterday. He seemed to be improving then.)

Bongbong Marcos ran but failed to win the vice presidency in 2016, losing to Leni Robredo by just a slim margin. Bongbong Marcos has since filed an electoral protest against Vice President Robredo. – Rappler.com