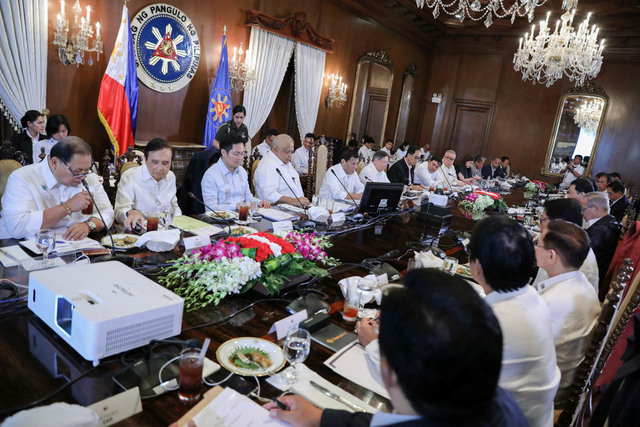 MANILA, Philippines – Malacañang said on Sunday, April 5, that President Rodrigo Duterte will be “donating his one month salary” to help in the fight against the coronavirus outbreak in the country.

In a statement on Sunday, Presidential Spokesperson Salvador Panelo added that several members of the Duterte Cabinet have also “pledged to cut 75% of their monthly salaries from the month of April to December of this year.”

Other officials “have volunteered a salary deduction” for the duration of the state of public health emergency “in solidarity with our countrymen and to help in the government efforts to halt the spread of the coronavirus,” he added.

“Other officials with the rank of secretaries are similarly giving portions of their respective salaries to boost the collective fight against the dreadful disease,” Panelo noted.

Meanwhile, assistant secretaries in Panelo’s offices, the Office of the Chief Presidential Legal Counsel and the Office of the Presidential Spokesperson, have also “committed to donate at least 10% of their income directly to the Office of Civil Defense this month.” They will likewise “continue providing financial and relief assistance from their salaries to groups who are at the frontline of this health crisis in the succeeding months.”

President Duterte is under Salary Grade 33, the highest classification in the government’s salary scale. Under the first tranche of the Salary Standardization Law of 2019, he is currently getting a monthly salary of at least P395,858.

Cabinet secretaries are under Salary Grade 31, who receive a monthly salary of at least P262,965.

Over 200 members of the House of Representatives had earlier pledged to donate their salaries for the month of May to aid in efforts versus the coronavirus. They, too, are under Salary Grade 31. – Rappler.com