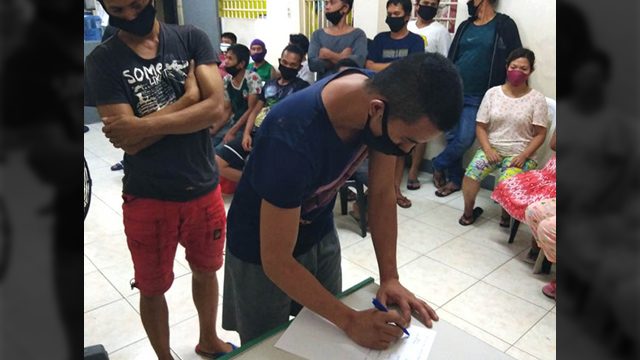 MANILA, Philippines – After 5 days in jail, and many back-and-forths in the legal process made difficult by the lockdown, the 21 urban poor residents who arrested while asking for food aid got out on bail early evening Monday, April 6.

The residents were released from the Quezon City Police District (QCPD) headquarters at 7:30 pm on Monday.

According to their counsel Krissy Conti of the National Union of Peoples’ Lawyers (NUPL), while the base bail was P15,000 each, they had to pay per person an additional P2,500 or P500 for each of the 5 violations, bringing it to a total of P367,500.

Celebrities Frankie Pangilinan, her parents actress Sharon Cuneta and Senator Francis Pangilinan, as well as Ria Atayde and Enchong Dee pitched in for the fund, which was pooled beginning April 1 when they were arrested.

Lawyer Tony La Viña, a Rappler board member, also sponsored one person, according to Conti.

The accounts they set up online also received donations from P1,000 to P20.50, presumably from students who donated what little they could from their allowances.

“Kinasuhan ang mga ito ng Bayanihan Act, pero ang totoong bayanihan ay ‘yung pagtulong sa mga tao,” said another one of their lawyers, Michael de Castro. (They were charged under the Bayanihan Act, but the real bayanihan was the help of the people.)

Bayanihan is the Filipino tradition of the community pulling in resources or contributing their time and energy to help a neighbor.

The 21 are charged for 5 violations: unlawful assembly or violation of the Batasan Pambansa Bilang 880; non-cooperation in a health emergency under Republic Act 11332; resistance to authority or Article 151 of Revised Penal Code; and spreading false information and impeding access to roads under President Rodrigo Duterte’s special powers under the Bayanihan to Heal as One Act.

Because all hearings have been suspended, the rest of the legal proceedings, from the arraignment to trial, will have to be postponed.

The 21 residents were arrested in a violent dispersal of an assembly in Sitio San Roque on April 1. Placards were seen in the assembly, criticizing government and demanding food aid.

Under the rules of criminal procedure, for cases of warrantless arrests over minor offenses, policemen can only legally hold the individuals in custody for 12 hours from the time of arrest.

It means they only have 12 hours to bring the arrested people to court.

In this case, electronic inquest took more than two days before it was resolved, and the charges were only filed in court on Monday.

The posting of bail was also delayed because some of the residents did not have or have lost their IDs.

There was also a slight delay with their photos as the court staff initially did not accept the photos because they were not printed on photo paper.