Over 6,600 Filipinos flee Sabah as of April 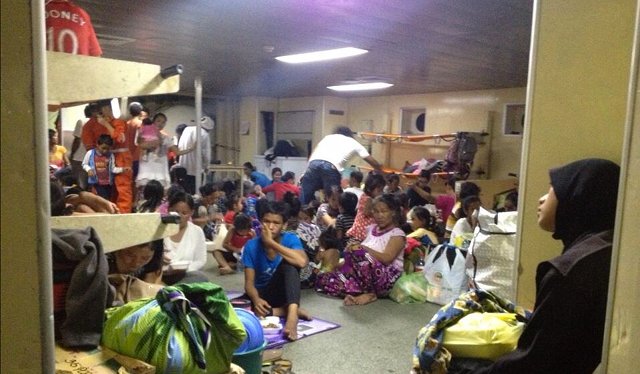 MANILA, Philippines – Filipinos continue to flee Sabah even as the tension appears to have eased.

Two small boats carrying a total of 130 Filipinos from Sabah arrived in Tawi-Tawi capital town Bongao on Saturday, April 6, according to a report by the Crisis Management Committee (CMC) based in Zamboanga City.

A big group of 400 also arrived Wednesday last week, April 3, in Taganak. Taganak is part of Turtle Islands, which is under the jurisdiction of the province of Tawi-Tawi. The island is about 45 minutes away from Sandakan, Sabah via speedboat.

A consolidated report by the Crisis Management Committee shows a total of 6,609 Filipinos or 2,133 families have fled Sabah as of April 7.

“We have to maintain our security patrols. If there are evacuees fleeing Sabah, we should assist them,” he said.

Tension began when followers of the Sultanate of Sulu sailed to Lahad Datu in February to stake their claim on Sabah.

Malaysia claims about 70 Royal Security Force (RSF) members have been killed since the standoff between the RSF and Malaysian security forces.

The standoff strained ties between the Philippines and Malaysia, which insists that Sabah is part of its territory.

Philippine President Benigno Aquino III is studying a report on the legal and historical aspects of the Philippines’ claim to Sabah. – Rappler.com