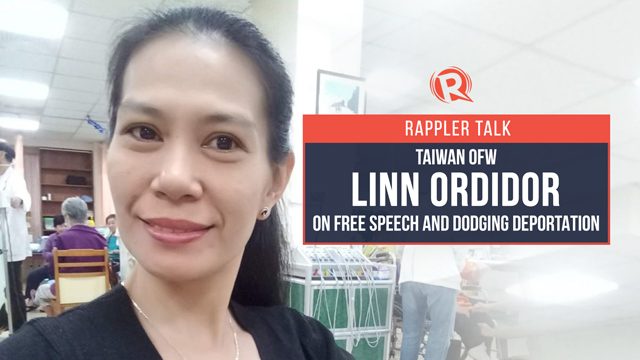 Facebook Twitter Copy URL
Copied
Caregiver Linn Ordidor made headlines when the Philippine government pushed to have her deported from Taiwan for having criticized President Rodrigo Duterte. She tells Rappler why she thinks being outspoken is worth the risk.

MANILA, Philippines – It was through a friend’s message, with a link to a news report, that Linn Ordidor found out on April 25, a Saturday, that the Philippine government was asking the Taiwanese government to have her deported.

The reason – her posts on Facebook that the Department of Labor and Employment (DOLE) found “nasty and malevolent,” and that it felt were meant to “discredit and malign” President Rodrigo Duterte, as well as to “destabilize the government.”

Her posts were indeed critical of the President, Ordidor would later admit, but she did not think they were what the DOLE described them, and certainly no reason for officials from the Philippine labor office in Taichung, Taiwan, to seek her out at her workplace in Yunlin County on April 17.

What’s wrong with speaking one’s opinion about goings on in her homeland? The last time she checked, the Philippines was a democracy where free speech is enshrined as a basic right, Ordidor tells Rappler’s JC Gotinga in this interview.

Unfazed by the warnings from the labor officials, Ordidor refused to apologize for the opinions she had stated publicly, although she did worry a little about what they would do about what they called her “willfulness.”

Sure enough, a week and a day later, the labor office was pushing to have her pulled from her job and sent home to the Philippines – to her 3 children who depend on her and her husband’s remittances.

Was she to lose her caregiver job of nearly 3 years simply because the Duterte administration was offended by her criticism?

Ordidor did not have to worry too long, because on Tuesday, April 28, the Taiwanese government rejected the DOLE’s request to have her deported. Taiwan, which the Philippines considers a renegade province of China, said the Filipina worker is covered by their law protecting freedom of speech – a law that also exists in the Philippines.

Watch and listen as Linn Ordidor talks about her convictions, and why she thinks being opinionated and outspoken is worth the risk of offending the powerful. – Rappler.com