Among first Filipino nurses in his UAE hospital, Marlon Jimenea dies of COVID-19 Facebook Twitter Copy URL
Copied
His wife, healthcare assistant Merry Janet, says Marlon didn’t show signs of breaking down, so they both took his condition lightly. He died in the ICU, where he worked.

DUBAI, United Arab Emirates – Marlon Jimenea, the nurse who this week died of COVID-19 in the UAE city of Sharjah, had not been well although he tested negative for influenza A and B a few days before he was admitted to the emergency room of the University Hospital Sharjah (UHS).

That same evening, he was transferred to the intensive care unit, where he was intubated. He would be staying at the ICU for the next 21 days, going through 6 cardiac arrests – 3 of which happened in just a day – before finally passing on.

Marlon, 44, was himself a nurse in that ICU.

This was according to Marlon’s wife, Merry Janet Jimenea, 40, a healthcare assistant. She told Rappler in an exclusive interview that her husband had a check up on April 2, a Thursday.

“Sabi nya sa akin, i-proceed daw for COVID test kung mag-positive,” she added, referring to Marlon’s advice. (He told me, proceed with a COVID test if it turns positive.)

Merry Janet and their daughter, 6-year-old Marianne Jane “Queenie” Jimenea, were quarantined after Marlon was admitted at UHS. The two tested negative for COVID-19.

“Kaukausap ko pa rin s’ya dito sa bahay. Wala na kaming magagawa. (I still talk to him as if he’s here at home. There’s nothing we can do anymore.) We didn’t expect this to happen,” she added, her voice quivering on the phone, apparently holding back tears.

“Our daughter feels like I don’t love her because her daddy was all I’d been praying for since he was confined, until now. It’s hard to explain to a child,” she said in Filipino.

“It somehow lifts the burden when I talk to him, in the kitchen, for example. I know he’s here. Life was easy with him. It hurts because he was managing and guiding our lives. Then he’s gone. Sometimes, I don’t know what I’ll do,” Merry Janet said. “Mag-isa na ako…iniwan na niya.” (I’m alone now. He left me.)

Merry Janet said Marlon didn’t show signs of breaking down, so they both took his condition lightly.

“He felt he could handle it. We were not that bothered. The fever subsided, but there was dry coughing,” she added in Filipino.

Marlon’ however, started having a bloated tummy.

By Saturday, April 4, Marlon’s condition started to deteriorate, the wife said: “He had no appetite. He had difficulty swallowing, but it seemed like nothing. We were not expecting it to be COVID. He handles patients, so he knew.”

Merry Janet, who was on duty that day, said their daughter’s nanny told her Marlon had a bout of dizziness. They would later learn that it was due to the declining oxygen level in his body.

She said she talked to Marlon early morning the next day, Sunday, April 5. “I said, ‘Dad, this doesn’t look good. Do you want me to take you to the hospital. Can you handle it?'”

Merry Janet said her husband managed to book an appointment at his hospital, UHS. At 4:30 pm, he messaged her from the hospital, asking her what time she’d be home to prepare his personal effects. He didn’t want him to bring them over, however, worried that she would be apprehended due to the curfew if it was too late.

“I didn’t know he was a suspected COVID case. Kung alam ko lang, eh di sana lumipad na ako (If I had known, then I would have rushed to be with him),” Merry Janet said.

She was later informed that Marlon’s “oxygen saturation” level was continuously going down. Low levels of oxygen in the body is among early warning signs of COVID-19, his doctors said.

That Sunday morning would be the last time the couple was together.

Marlon was admitted to the ER in the afternoon then was moved to ICU that evening where he was intubated, according to Merry Janet. “Hindi na kami nakapag-usap mula nang umalis sya papuntang ospital.” (We weren’t able to talk since he left for the hospital.)

Merry Janet is now doing the paperwork for the cremation of her husband’s remains. She plans to bring his remains home to the Philippines. 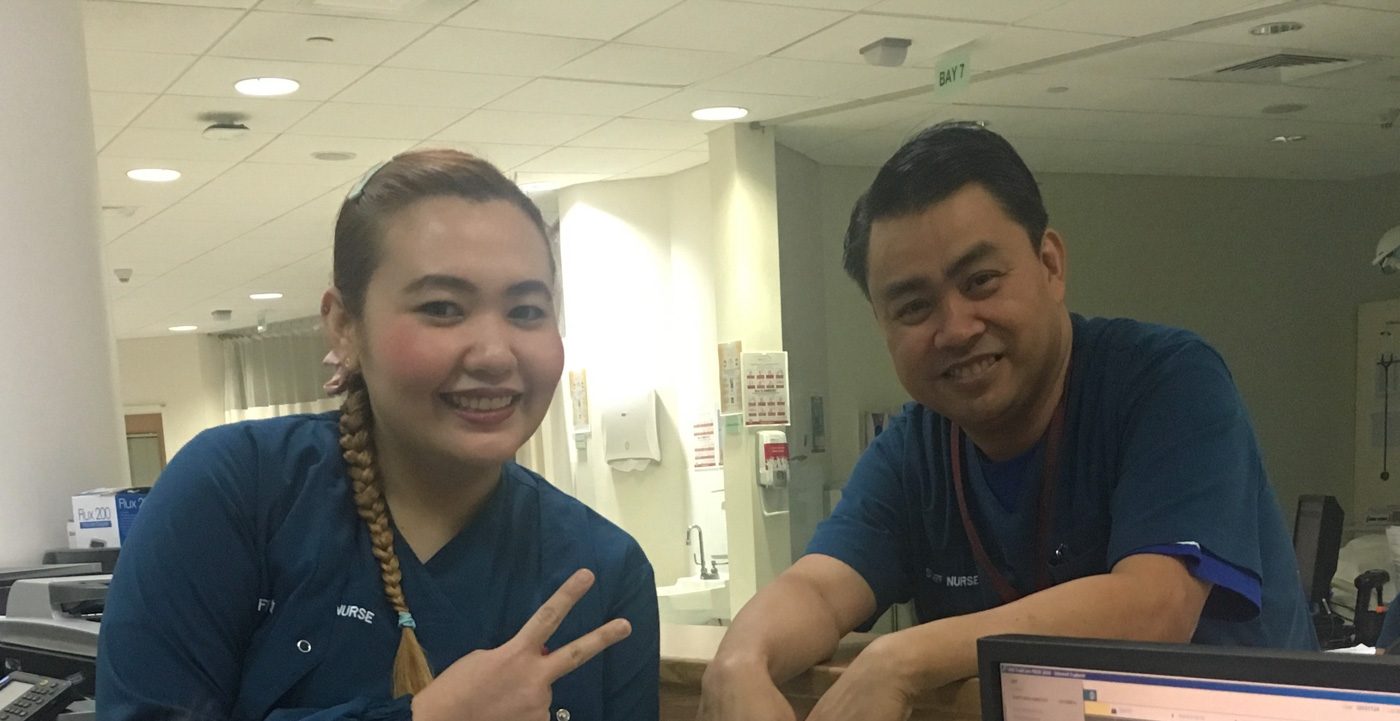 He was ‘kuya’ to co-workers

Misyl Jovero, Marlon’s colleague at UHS who looked after him during his confinement at the ICU, said his co-workers were “shocked.”

“We were talking to him when he went to the emergency room, and he seemed okay. When we found out from the doctor that he was intubated, we cried because he was like a big brother to us, and not just a colleague. We were family,” she said in Filipino.

Going on duty with him as patient was “physically, emotionally, and mentally draining,” Jovero said.

“It hurt me so much doing nursing care for him, like suctioning for example, because I know it’s painful, but I needed to do it. So you’d just cry, Jovero said. “At the end of the shift, you had to update his family, especially the wife, as we we close to her. Of course, she’ll cry too, and you want to comfort her, but there are limitations as she’s only on the phone.)

“We never expected to see him as an ICU patient, someone from our own unit. It’s hard to think about and digest what happened,” she added.

Jovero said Marlon did not show signs of respiratory distress when he arrived at the hospital. “COVID is really a traitor,” she said.

Jovero said Marlon, who was “an exceptional father and husband who have never hesitated to help,” also didn’t know he was diabetic. “It was only discovered upon his admission,” she said.

“In the end,” Jovero said, “It was heartbreaking, seeing him go right before your eyes.”

Marlon had been in the UAE for 8 years. He was among the first batches of Filipino nurses at UHS, according to Jovero.