May 8, 2020 5:15 PM PHT
Rappler.com
Facebook Twitter Copy URL
Copied
'As a democracy with not very strong institutions, you need people in the media to provide that check and balance,' says former Communications Secretary Ricky Carandang following the ABS-CBN shutdown 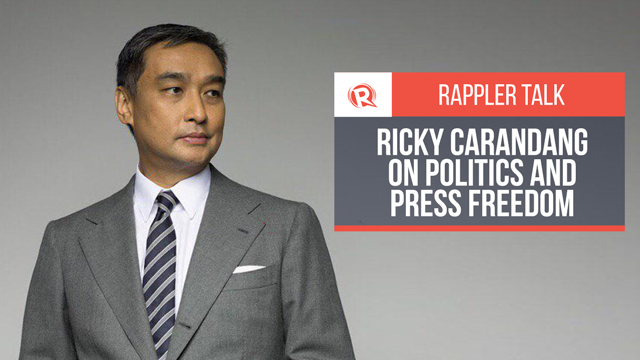 “As a democracy with not very strong institutions, you need people in the media to provide that check and balance,” he says in this interview with Rappler’s Maria Ressa.

He adds: “Our political culture has led to a very powerful executive, and they get their way with most of the branches of the government…. Media traditionally has been the last line of check and balance, and I think that’s the problem when they go after the Inquirer, Rappler, and ABS-CBN. They’re weakening that independent, sort of check-and-balance mechanism that open society should have.”

According to Carandang, though President Rodrigo Duterte remains popular, ABS-CBN has through the years also created its own “nationwide constituency” – a strong, resonant brand with its own political capital. He expects this to result in a political tug of war between the administration and the network.

Despite this, however, Carandang warns against using this political moment to further divide Filipinos.

“You need to have media there to speak truth to power, and we don’t necessarily have to be anti-Duterte to take a position like that,” he says.

Watch the rest of the interview here. – Rappler.com