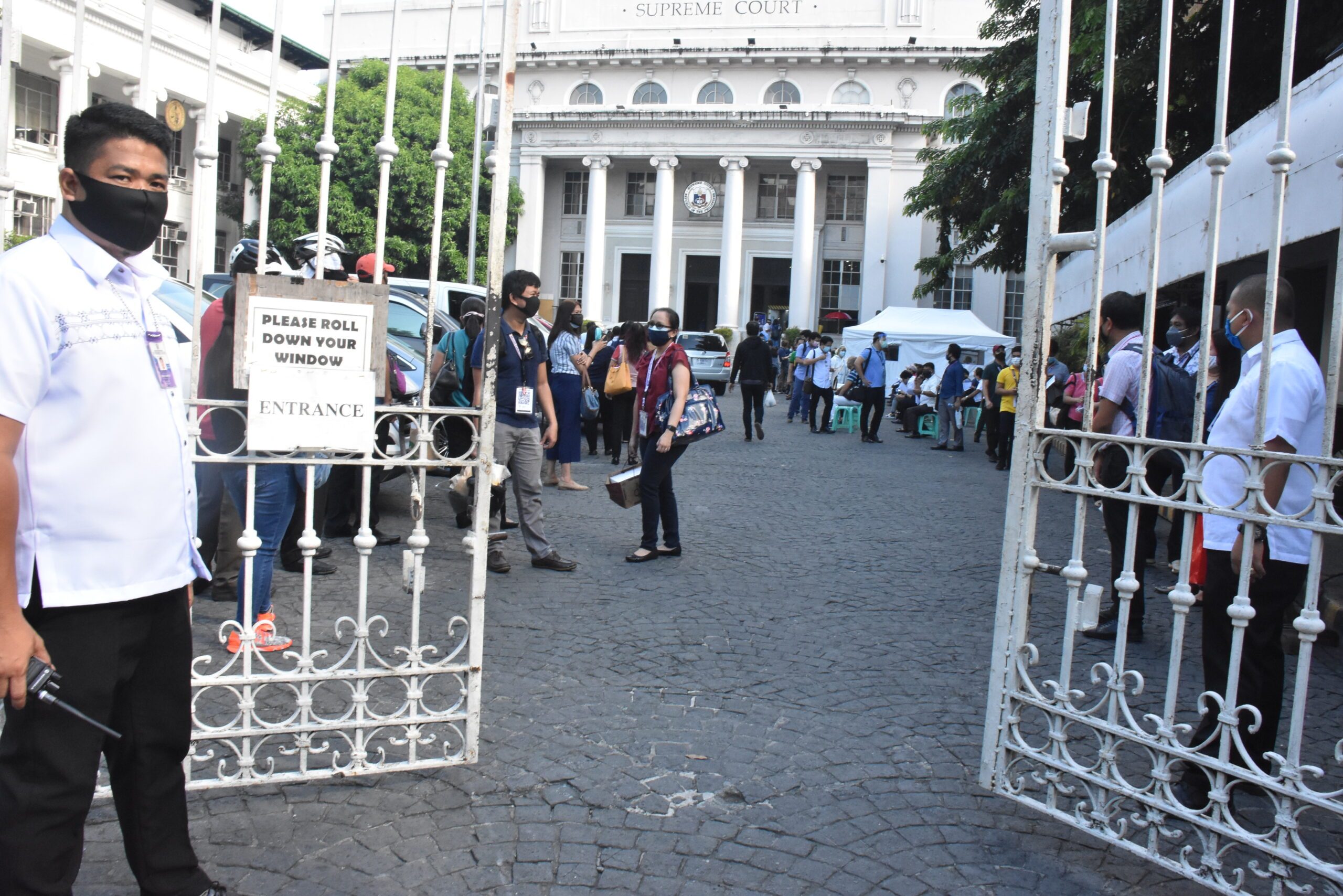 MANILA, Philippines – As the Philippine judiciary reopens with the lifting of the lockdown in Metro Manila and most areas, the Supreme Court (SC) is confronted with operational issues in lower courts and how they can cope with the bannered digital transition.

“Our courts and judges are ready. Access to justice should not be hampered even in times of crisis,” said Supreme Court Spokesperson Brian Keith Hosaka, citing Chief Justice Diosdado Peralta, as they fully reopened the courts starting June 1.

But there are some rumblings on the ground.

In a webinar held by the Court Appointments Watch (CAW) on Wednesday, June 3, Supreme Court Associate Justice Marvic Leonen was asked to address some of these issues, foremost being the internet capacity of lower courts to conduct virtual hearings, as the Supreme Court wants.

“I hope I have a magic wand to be able to make all of that available…. I guess a lot of it is dependent on your own diligence and initiative, and I have seen lots of judges caring so much about their staff, that they have in fact produced a lot of the precautions before the Supreme Court has made them mandatory,” said Leonen.

One complained in the webinar that “the Supreme Court is refusing to provide us in the lower courts with support for improving internet connectivity.”

“We are just told to find ways. We are really demoralized in the lower courts by the apparent disregard of Supreme Court [of] our situation on the ground,” said the participant.

In an earlier message, Hosaka said the Office of the Court Administrator (OCA) had reported sufficient capacity of courts to conduct virtual hearings. (READ: In fractured justice system, a simple solution: Let’s talk)

The OCA is an office under the Supreme Court that supervises lower courts.

“Proof of this is the fact that a total of 3,200 videoconferencing hearings were conducted by our trial courts in a span of only 3 weeks. [Court Administrator Midas Marquez] also said that around 22,500 prisoners were released from March 17 to May 22,” said Hosaka.

The spokesman added: “These information only show that videoconferencing hearings can indeed be resorted to, given the existing infrastructure we have. Perhaps, we only have to continue enhancing and improving these infrastructures.” (READ: ‘The digital court is not so far away’)

The EISP was the court’s grand digitization reform program, and, according to former chief justice Maria Lourdes Sereno, it was already 22% operational in 2018. Sereno was ousted that year by justices who resented some of her alleged transgressions, including decisions related to the EISP.

The Supreme Court Public Information Office (PIO) has yet to respond to our request for a status report on the EISP, including which digital storage facilities – ideally located in key provinces – are up and running.

Public transport is also a problem because, even though some areas outside Metro Manila have resumed mass transport, some public utility vehicles (PUVs) are having difficulties obtaining health clearances to start plying their routes.

Because of this, Peralta has allowed some courts to operate only on skeleton staff, but the Chief Justice maintained that, despite this, “all court services and functions are fully operating.”

“That will mean a large expenditure on our part and, of course, that there are also efforts to try to coordinate with local governments that have the funds in order to be able to help us with rapid testing,” said Leonen. (READ: In Duterte’s Philippines, lawyers are pandemic frontliners too)

A common thread in issues are questions on the admissibility of electronic documents as evidence.

Many of the questions sent to Leonen on Wednesday had to do with reconciling strict set of judicial rules with the Supreme Court’s move to allow electronic processes.

Leonen was referring to the Revised Rules on Evidence promulgated in October 2019, under which the Best Evidence Rule was replaced with the Original Document Rule.

Under this rule, emailed documents retain their authority, according to Court of Appeals (CA) Justice Maria Filomena Singh.

Lawyers have also been appealing to allow e-notary at least in the meantime.

In an earlier webinar held by the University of the Philippines (UP) College of Law, former Supreme Court spokesperson Ted Te also proposed a temporary amendment of rules on examination of witnesses, so that it can be done remotely, instead of “in open court,” as what it says in the rules.

Asked if the digital process can mean faster disposition of cases, Leonen said, “We will have faster case disposition simply because we are trying to be better judges and justices regardless of the technology.”

Marquez released on June 1 the latest coronavirus-related circular of the High Tribunal, which requires courts to submit daily reports on releases of prisoners, and weekly reports on virtual hearings. – Rappler.com