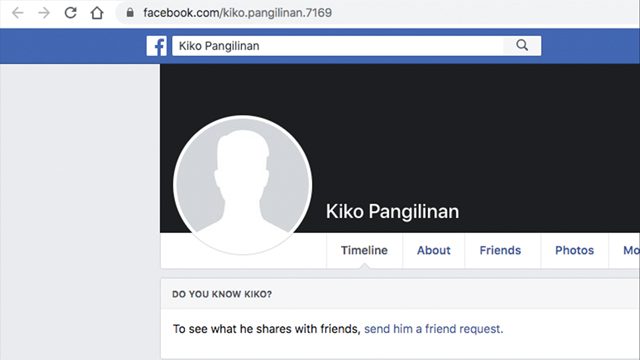 Facebook Twitter Copy URL
Copied
'We must not allow social media to be used as a platform for identity theft, intimidation, or worse, a tool to plant bogus evidence,' says Senator Francis Pangilinan

MANILA, Philippines – Two opposition lawmakers denounced the proliferation of fake accounts on Facebook, warning that these accounts could be used to plant evidence against real personalities critical of the Duterte administration.

There was growing alarm among Facebook users in the Philippines on Sunday, June 7, after many discovered multiple dummy accounts bearing their name. Students, activists, and journalists were among the victims. (READ: ‘I don’t feel safe, Facebook’: After discovery of ghost accounts, users demand better account protection)

“Students are worried that these accounts may be used to plant bogus evidence that would implicate them in crimes outlined in the anti-terror bill,” said Senator Francis Pangilinan in a statement on Sunday.

“We demand that Facebook investigate this incident and find the culprits behind it. We must not allow social media to be used as a platform for identity theft, intimidation, or worse, a tool to plant bogus evidence.”

There has been public outrage over Congress’ approval of the anti-terror bill, which President Rodrigo Duterte certified as urgent in the middle of the coronavirus pandemic. (READ: Robredo: Why rush anti-terrorism bill during pandemic?)

There are fears the proposed law would be used to target critics of the Duterte administration, and now, as fake accounts mushroom all over Facebook, there is even more concern.

“Facebook has been making billions of dollars as it turns a blind eye [to] disinformation and deception. Fake Facebook accounts can be likened to a crime scene and Facebook a willing accomplice to the crime. This must stop,” Pangilinan said.

Bayan Muna Representative Carlos Zarate also questioned whether the creation of fake Facebook accounts is a prelude to a crackdown on dissent.

“Even activists with no FB accounts now have 5 or more poser accounts. Are troll farms now harvesting names on online petitions so that their bots would not be detected and then use these fake accounts to spread fake news and get the real name owner into trouble?” said Zarate, who is also House deputy minority leader.

“This is online tanim-ebidensiya (planting of evidence) and identity theft if this persists. If the proposed terror bill is enacted into law, real name owners of these fake accounts can be easily sent to jail for being framed by such means.”

Facebook said on Sunday that it is now looking into the matter.

“We understand the concerns raised by our community in the Philippines,” a company spokesperson said in a statement.

“We’re investigating reports of suspicious activity on our platform and taking action on any accounts that we find to be in violation of our policies.”

The Department of Justice also ordered its Office of Cybercrime to probe the creation of fake Facebook accounts. Computer-related identity theft is a crime under Republic Act No. 10175 or the Cybercrime Prevention Act of 2012. – Rappler.com