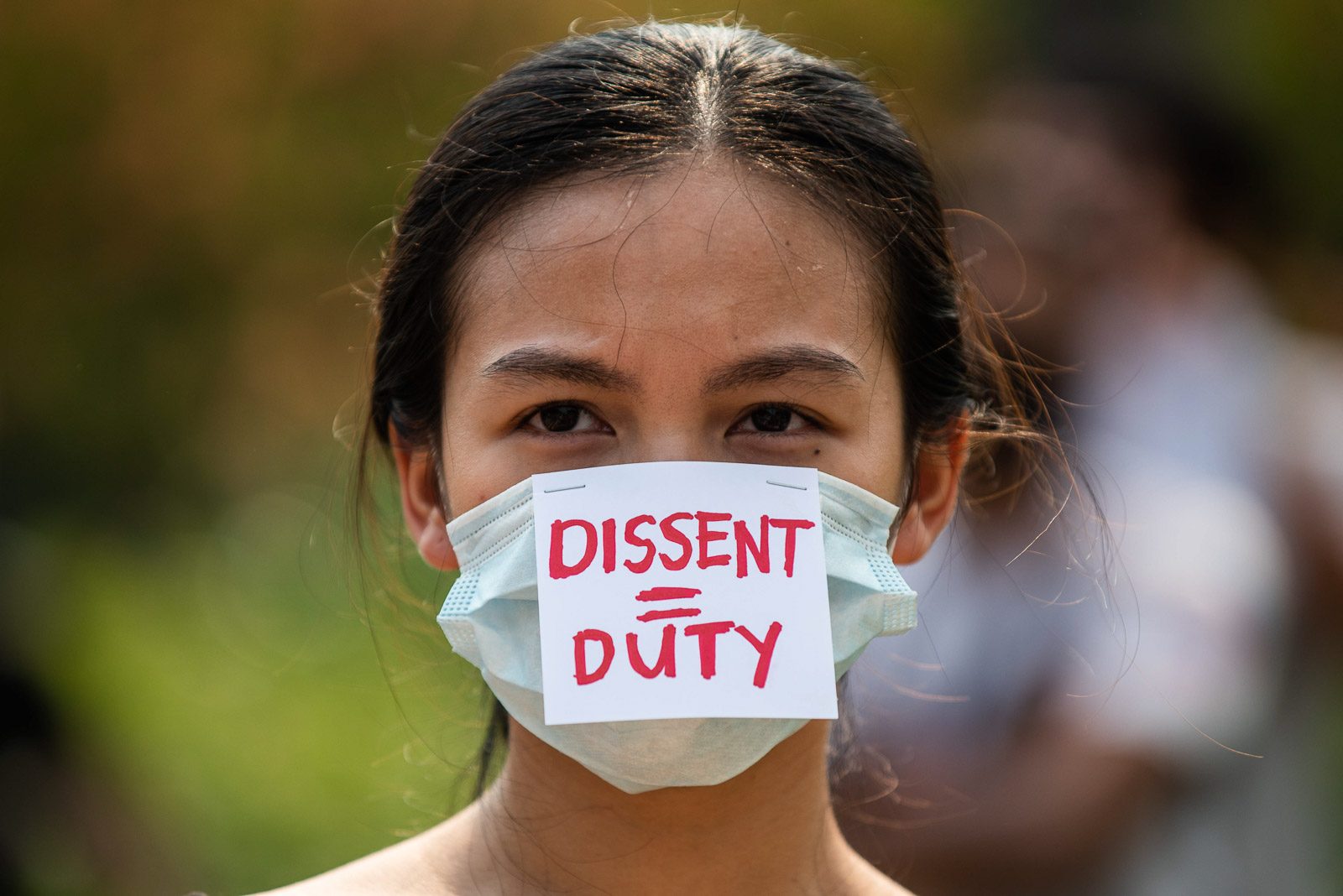 Facebook Twitter Copy URL
Copied
DOJ Spokesperson Markk Perete says Section 4's exception on dissent 'should calm concerns,' but he leaves out a 'killer' provision. It's the provision on intent.

MANILA, Philippines – The Department of Justice (DOJ) is the latest in the government to defend the contested anti-terror bill, citing a provision in the measure that would exempt dissent from the definitions of terrorism, but the justice department leaves out a “killer” caveat.

“One of the provisions of the law which says that it’s not in essence penalizing dissent, ‘opposition, criticisms against the government, I think should somehow calm the concerns of certain quarters over the possible abuses which can allegedly be committed using the proposed anti terror bill of 2020,” Justice Undersecretary Markk Perete said in a mix of English and Filipino on Monday, June 8, over the government’s Laging Handa briefer.

Perete was referring to Section 4 of the bill which lists the definition of terrorism. The provision has an exception, which reads: “Provided, That, terrorism as defined in this Section shall not include advocacy, protest, dissent, stoppage of work, industrial or mass action, and other similar exercises of civil and political rights.”

However, Perete left out the crucial caveat of that provision, which says that dissent is not excepted if there is intent to cause harm or creates risk to public safety. (READ: EXPLAINER: Comparing dangers in old law and anti-terror bill)

“Provided, That, terrorism as defined in this Section shall not include advocacy, protest, dissent, stoppage of work, industrial or mass action, and other similar exercises of civil and political rights, which are not intended to cause death or serious physical harm to a person, to endanger a person’s life, or to create a serious risk to public safety.”(emphasis ours)

“With this killer provision the law enforcer, the executive agencies can just allege the contrary and ensnare innocent persons and derogate human rights and civil liberties. There was some sort of maliciousness on the part of the sponsors when they did not quote in full in provision which includes this killer colatilla,” Lagman said in a Rappler Talk interview.

The Free Legal Assistance Group (FLAG) said the exception on dissent is “hollow.”

“Considering this government’s historical record of impatience with institutional restraints on executive power, the exception rings hollow,” FLAG said in a statement.

FLAG said that the “killer” caveat negated the entire exception on dissent.

Parse the entirety of Section 4:

Sec. 4. Terrorism. – Subject to Section 49 of this Act,  terrorism is committed by any person who within or outside the Philippines, regardless of the stage of execution;

(a) Engages in acts intended to cause death or serious bodily injury to any person, or endangers a person’s life;

(b) Engages in acts intended to cause extensive damage or destruction to a government or public facility, public place or private property:

(c) Engages in acts intended to cause extensive  interference with, damage or destruction to critical  infrastructure;

when the purpose of such act, by its nature and context, is to intimidate the general public or a segment thereof create an atmosphere or spread a message of fear, to provoke or influence by intimidation the government or any of its international organization, or seriously destabilize or destroy the fundamental political, economic,  or social structures of the country, or create a public emergency or seriously undermine public safety, shall be guilty of committing terrorism and shall suffer the penalty of life imprisonment without the benefit of parole and the 2 benefits of Repubhc Act No. 10592

PROVIDED, that, terrorism as defined in this Section  shall not include advocacy, protest, dissent, stoppage of work, industrial or mass action, and other similar exercises of civil and political rights, which are not intended to cause death or serious physical harm to person, to endanger a person’s life, or to create a serious risk to public safety.

Former Supreme Court spokesperson Ted Te, a professor of criminal law, said that the person invoking the exception, in this case the dissenter, has the burden to prove that he falls under the exception.

And because the exception has an exception, which is the intent to create harm or risk, “all that the State, through the DOJ, needs to do is to allege the exception to the proviso, i.e that the intent is to cause death, harm, or risk,” Te added.

Rappler tried to ask the DOJ for a follow-up on this caveat, but Perete has not responded as of posting.

The DOJ has already started its review on the constitutionality of the enrolled bill.

Justice Secretary Menardo Guevarra said the DOJ’s comments will be sent to Executive Secretary Salvador Medialdea for his study, before the latter makes a recommendation to President Rodrigo Duterte.

Once the enrolled bill is transmitted to Malacañang, Duterte has to either pass or veto it. If Duterte doesn’t act on it upon 30 days of receipt, it will lapse into a law.

Filipinos have been calling their representatives to withdraw their yes votes, while opposition lawmakers called on Congress leadership to not send the enrolled bill yet until issues on constitutionality remains. – Rappler.com