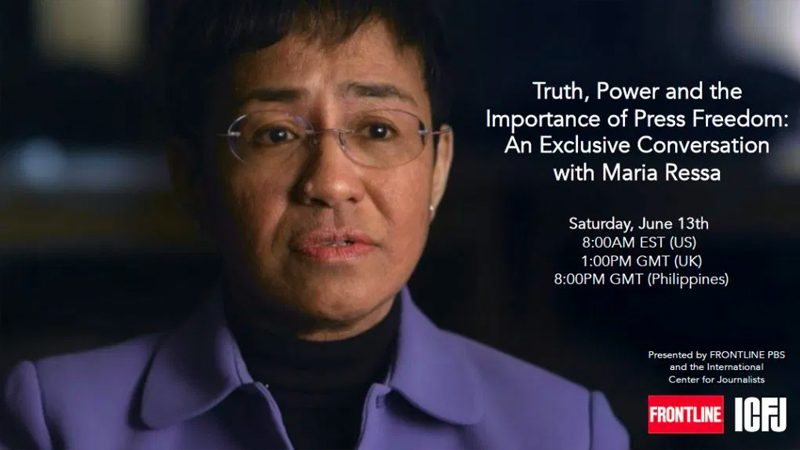 “Truth, Power and the Importance of Press Freedom: An Exclusive Conversation with Maria Ressa,” will be presented by FRONTLINE in cooperation with the International Center for Journalists (ICFJ).

A Thousand Cuts Director Ramona Diaz and FRONTLINE Executive Producer Raney Aronson-Rath will join the conversation, which will be moderated by Dr Julie Posetti, ICFJ’s Global Director of Research.

People who want to join the FRONTLINE conversation may RSVP to the event on this webpage. The event will be hosted on Zoom and those who RSVP will receive a Zoom link to attend which will be included in the confirmation notice sent to users’ respective emails.

The conversation will also showcase clips from A Thousand Cuts, for those outside the Philippines who cannot view the full film yet. Philippine viewers can watch A Thousand Cuts  until 6 pm on Saturday, June 13, Philippine time. (READ: ‘Frontline’ acquires Ramona Diaz’s ‘A Thousand Cuts’)

The conversation will be held ahead of a scheduled verdict on a cyber libel charge against Ressa, Rappler Incorporated, and former Rappler researcher Rey Santos. The cyber libel case has constitutional implications because to be able to charge Ressa and Santos, the Department of Justice (DOJ) found an obscure law – Republic Act No. 3326 – to extend libel’s prescription period from one year to 12 years. (READ: Maria Ressa ’embraces fear’ but hopeful ahead of cyber libel verdict)

The moves against Rappler have drawn international concern and made Ressa globally renowned as one of the people standing up against authoritarian governments. Time magazine named Ressa a Person of the Year in 2018, and she was named a laureate in the 2020 Four Freedoms Awards. (READ: Maria Ressa among TIME’s most influential women of the century)

Rights watchdogs say the Duterte government has in recent weeks stepped up its campaign to silence dissent in other ways, such as the shutdown of broadcaster ABS-CBN and with lawmakers passing the Anti-Terrorism Act of 2020, which allows warrantless arrests, weeks of detention without charge and other measures that critics fear could be used to crack down on peaceful government opponents.

The Philippines is currently ranked 136th on the World Press Freedom Index.  – Rappler.com