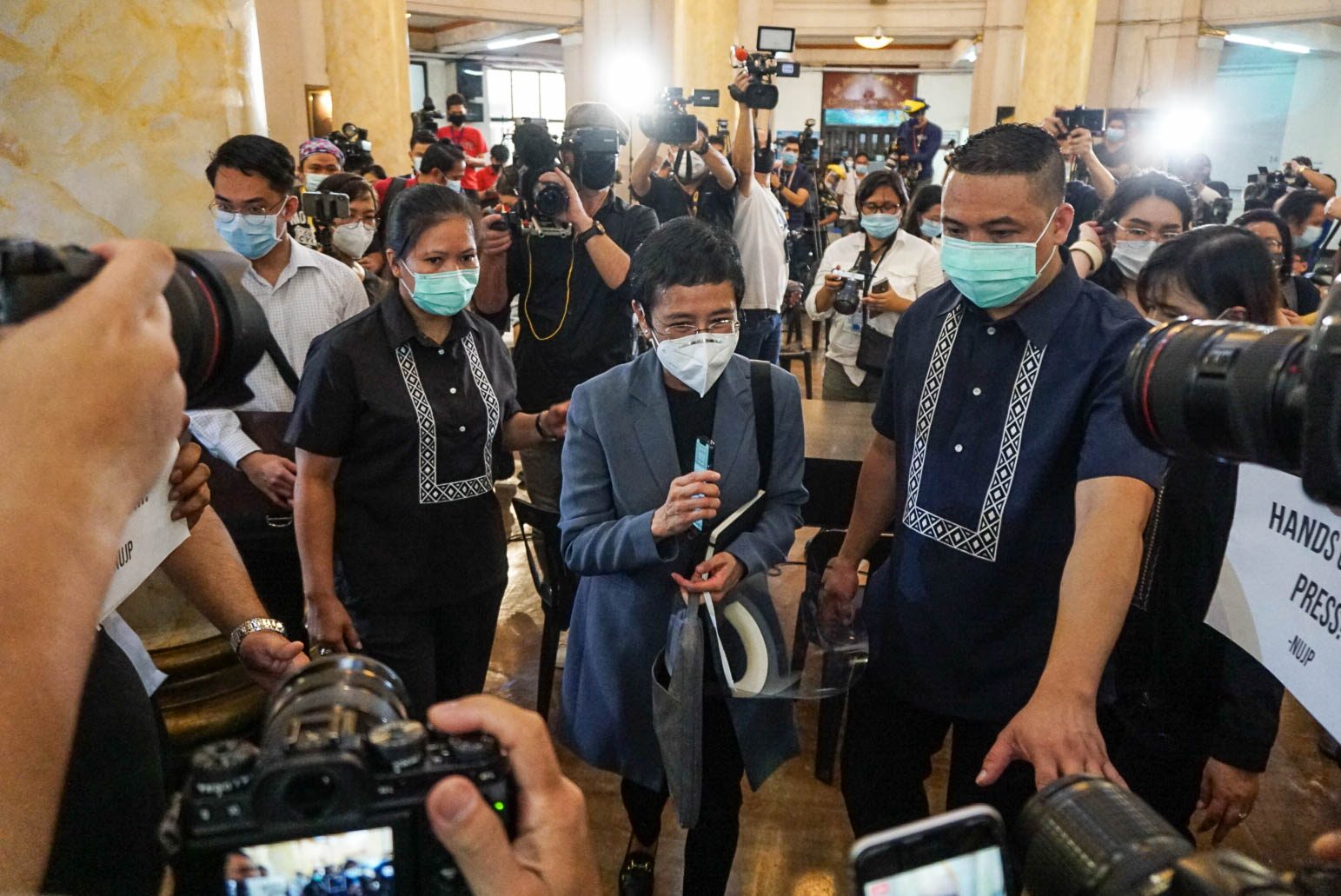 Ressa and Santos were found guilty by Judge Rainelda Estacio-Montesa. They were sentenced to a minimum 6 months and 1 day to a maximum of 6 years in jail over charges filed by businessman Wilfredo Keng.

The conviction is appealable all the way to the Supreme Court and the two are entitled to post-conviction bail while they exhaust legal remedies in higher courts.

Coalition for Women in Journalism (CFWIJ)

The CFWIJ condemned the cyber-libel conviction, saying they were “deeply disturbed” by it.

They said: “We urge our colleagues in the press, and other stakeholders of democracy to join us in this call for solidarity with Maria Ressa and Rappler’s work. We call upon the community to condemn this conviction, which we find illegal and manipulative to democratic values and independent press.”

The AAJA-Asia condemned the conviction, saying: “AAJA-Asia unequivocally stands in full support of Ms Ressa, Mr Santos and all Filipino media and journalists in this new attack against press freedom that critically undermines the right for every citizen in the Philippines to access free, independent news. We join with organizations around the world to call for an end to the prosecution of journalists who are simply doing the brave job of reporting inconvenient truths in the Philippines.”

The ICFJ called June 15 “a devastating day for journalism.”

“This is a miscarriage of justice,” said ICFJ President Joyce Barnathan. “Maria is facing a bevy of charges designed to silence her and Rappler. If journalists are muzzled, democracy itself is at stake. ICFJ condemns Maria’s conviction and calls for all other charges against her to be dropped.”

The group added: “For the Philippines in particular, this is a devastating blow to a country once known for a vibrant, free press. Ressa has often said that her case is the ‘canary in the coal mine’ for independent journalism everywhere. Journalists worldwide need to do what they do best: report facts, seek the truth, and hold the powerful to account.”

IPI Executive Board chair Markus Spillmann said in a statement: “On behalf of the IPI Executive Board, I deplore the convictions of my fellow IPI Board member Maria Ressa and Reynaldo Santos. This is a sad day for journalism and press freedom not only in the Philippines but around the world. Let us be clear: Maria Ressa has been convicted for her fearless journalism and speaking truth to power. This ruling serves as a warning to all independent journalists in the country.”

He added, “The global IPI community stands behind Maria Ressa and we will support her fight for justice and for the right to do her work freely.”

IFCN Director Baybars Orsek, tweeted: “A true hero; [Maria Ressa] and her case is a testament to the need for solidarity among democracy and press freedom advocates.

“While her and others are trialed in politically motivated ‘courts,’ repressive leaders and regimes will be trialed in the conscience of history.”

He added: “[Rappler] is a verified signatory to [IFCN’s] code of principles. They are a respected organization across the fact-checking community. We stand by with our colleagues and friends at [Rappler] in their struggle for accountability and democracy.”

The Index on Censorship and English PEN condemned the court’s decision, saying it was part of a campaign to silence dissenting voices in the country.

“This campaign is a frightening indictment of the pressures on journalists to stop reporting. We call on those who care about media freedom globally to stand up and take notice. This is not just about one journalist in one place, this has significance for journalism everywhere as part of a trend where we see reporters put under enormous pressures to stop covering stories,” said Rachael Jolley, Index on Censorship editor-in-chief.

Daniel Gorman, director of English PEN, said: “Today is a terrible day for those who care about freedom of expression and a free press, in the Philippines and across the world. This judgement aims to intimidate journalists and writers working across the Philippines. English PEN stands with Maria Ressa, and calls for the government of the Philippines to drop these spurious charges and release her immediately.”

The groups called on the government to drop the cases against Ressa and Santos. “We stand with them, along with all writers standing for a free media in the Philippines,” they said.

“Today’s conviction and sentencing of Maria Ressa of up to 6 years in jail is an outrageous crime against press freedom,” said Shawn Crispin, CPJ’s senior Southeast Asia representative.

“Although out on bail while she appeals the verdict, Ressa’s wrongful conviction sends a message to all journalists that you could be next if you report critically on President Rodrigo Duterte’s government.”

FCC Hong Kong said they deplored the guilty verdict, adding, “The FCC is gravely concerned about the precedent this sets and the possible chilling effect on the press in the Philippines and across the region,” said FCC president Jodi Schneider.

“Press freedom, already endangered in the Philippines, is now further undermined with this high-profile verdict.”

The IFN, an affiliate of the National Union of Journalists of the Philippines, expressed disdain at the Duterte administration.

“The court’s judgement is a blow to democracy, journalism, and freedom of expression around the world,” they said.

“The case against Ressa and Santos highlights the ongoing use of the rule of law by authoritarian governments to silence the media and hold politicians accountable. The Philippines must remember, democracy is held up by a 4th pillar, journalism; any attempt to prohibit freedom of expression undermines the democratic cohesion that once existed in the Philippines.”

“By passing this extremely harsh sentence at the end of utterly Kafkaesque proceedings, the Philippine justice system has demonstrated a complete lack of independence from the executive,” said Daniel Bastard, the head of RSF’s Asia-Pacific desk.

“This sentence bears the malevolent mark of President [Rodrigo] Duterte and his desire, by targeting Rappler and the figure of Maria Ressa, to eliminate all criticism whatever the cost. We urge Manila’s judges to restore a semblance of credibility to the Philippine judicial system by overturning this conviction on appeal.”

RSF also mentioned that the network giant ABS-CBN was ordered by the National Telecommunication Office to shut down on May 5 following a warning from Duterte in December 2019.

The Philippines is ranked 136th out of 180 countries and territories in RSF’s 2020 World Press Freedom Index.

The World Association of Newspapers and News Publishers (WAN-IFRA) condemned the court’s decision.

“We are appalled by the court’s decision and urge Maria’s guilty verdict to be quashed at the earliest opportunity,” said WAN-IFRA CEO, Vincent Peyrègne.

“The law is being applied retroactively and is now a threat to all independent publications in the Philippines. This is a dark day for press freedom in the country, and a dark day for all Filipinos.” – Rappler.com