Jun 16, 2020 3:45 PM PHT
Samantha Bagayas
Facebook Twitter Copy URL
Copied
The now-deleted post implied Senator Risa Hontiveros should be sexually harassed by prisoners to change her mindset that men should be taught not to rape 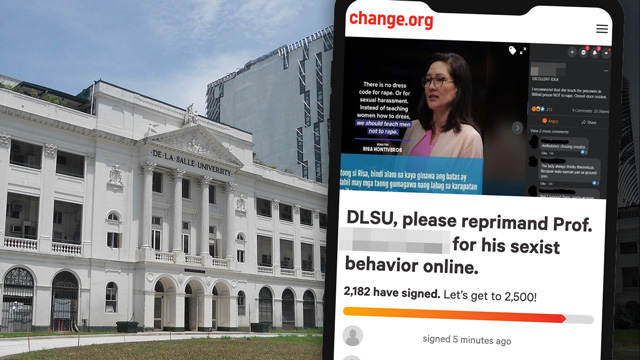 MANILA, Philippines – After widespread clamor from the student body to investigate the matter, De La Salle University cut ties with a part-time faculty member after he posted a “misogynistic” message on Facebook.

The male teacher – who, until the incident, was connected for 7 years with the Ramon V del Rosario College of Business (RVRCOB) under the Marketing and Advertising Department (MAD) – shared a Facebook post of Senator Risa Hontiveros’ statement denouncing rape culture on June 14. (READ: ‘Inviting the beast?’ #HijaAko trends as women call out victim blaming)

Hontiveros had said that instead of teaching women how to dress so they supposedly wouldn’t get raped, people should teach men not to rape. The senator was reacting to a viral post by the Lucban Municipal Police Station that instructed women not to wear revealing clothes in a bid to avoid being sexually harassed.

In his caption, the DLSU faculty member implied that Senator Hontiveros should be thrown into prison and be sexually attacked by inmates to change her mindset about the issue changes.

“Excellent idea. I recommend that she (Senator Risa Hontiveros) teach the prisoners in Bilibid prison not to rape. Closed-door session,” he said in his now-deleted Facebook post.

The part-time faculty member has been named in internal documents pertaining to the university’s investigation into the matter. We shall withhold his identity while we wait for his comment within a  reasonable period of time.

Outraged by the faculty member’s Facebook comment, students launched a Change.org petition, urging the DLSU administration to reprimand him for the “sexist behavior online.” The online petition has gathered at least 2,100 signatures as of Tuesday, June 16.

“As an educator in the Lasallian community, he should be held responsible for his statements online to Sen. Risa Hontiveros. This statement, not only being misogynist in nature, goes against the Lasallian value of respecting all peoples,” the Change.org petition read.

Several student groups including Alyansang Tapat sa Lasallista have also made a statement denouncing the faculty member’s post, which the Business College Government believes “perpetuate a culture of hate, victim-blaming, and rape within the University, and have no place in the Lasallian community.”

According to the official student publication of DLSU The LaSallian, the University Student Government had filed a complaint. RVRCOB College president Nates Driz also told The LaSallian that they had reached out to both the college office and MAD as well.

In a statement sent to the DLSU University Student Government, Marketing and Advertising Department chairperson Mary Julie Balabar assured students that she had talked to the faculty member, together with her Vice Chair Jose Luis Liongson, to call out his behavior on Monday morning, June 15.

According to Balabar’s statement, the teacher had apologized for his post, saying “it was not his intention to insinuate harassment for Sen. Hontiveros nor promote the prevalent rape culture present today.”

“We all decided not to renew his contract next term. Therefore, he will not be teaching with us starting this 3rd term,” said Balabar.

The Marketing and Advertising Department chairperson thanked the Lasallian community for their vigilance and asserted that their department “does not and will not tolerate any behavior that goes against the values and morals of the University, particularly from a professor.”

She added that the DLSU community must be more responsible with their social media posts moving forward.

“Let us put a stop to cyberbullying in all its forms and be mindful of how our posts on social media can be hurtful,” she said. – Rappler.com