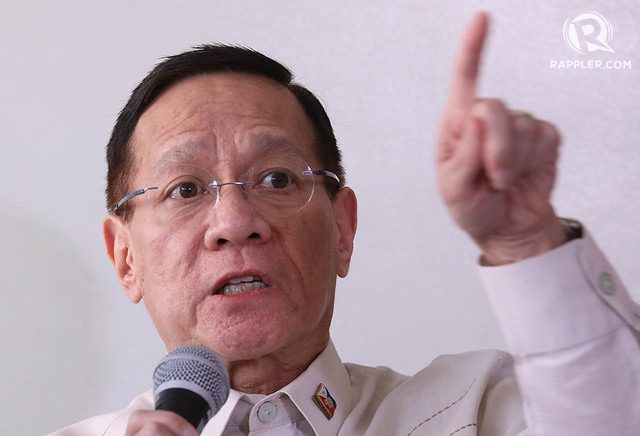 MANILA, Philippines (4th UPDATE) – The Office of the Ombudsman has decided to investigate the Department of Health (DOH), including Secretary Francisco Duque III, for alleged “anomalies” in the handling of the coronavirus pandemic.

Ombudsman Samuel Martires told reporters Wednesday, June 17, that he has created a joint investigating team (JIT) to look at supposed irregularities, including the “confusing and delayed reporting” of coronavirus cases and deaths.

“I directed the creation of  two more investigating teams who will jointly investigate alleged irregularities and anomalies committed by DOH officials and employees, including Health Sec. Francisco Duque, in relation to the response of the DOH  during this pandemic,” Martires said.

This investigation is done motu proprio or without the need for a complaint.

The DOH welcomed the investigation, and said it would comply with all the directives from Ombudsman.

“DOH officials will willingly cooperate with authorities to ensure utmost transparency throughout the duration of the investigation and beyond,” the DOH said in a statement Wednesday.

Among the issues to be investigated according to Martires are:

Investigators will also look into the procurement of test kits.

Senators have raised the alarm over alleged overpriced PPE and other testing equipment.

Martires earlier said they were also already looking at 11 complaints against local officials who were mishandling the distribution of financial aid to Filipinos under the government’s social amelioration program.

The DOH said it had issued all the checks to the families of the health workers who died and the 19 severe COVID-19 patients who had recovered. It added that the new claims were being processed as of Wednesday.

On the issue of “confusing and delayed reporting” of COVID-19 data, the DOH maintained that they had been reporting cases and deaths through its situation reports, COVID-19 tacker, virtual pressers, and other publicly accessible channels.

Malacañang said it “respects” Martires’ decision to conduct a probe on Duque, an alter-ego and appointee of President Rodrigo Duterte.

Presidential Spokesperson Harry Roque, in a statement, urged Duque and DOH officials to cooperate with the investigation.

“We will let the process run its course as we enjoin Secretary Duque and the entire DOH bureaucracy to cooperate with the investigation and respect the orders of the OMB,” said Roque.

Martires said the investigation into DOH and Duque is a fact-finding process.

It means it’s not a criminal process yet. If the investigators decide to file a complaint, then this move towards the criminal process of preliminary investigation, where respondents would have the chance to counter the accusations.

Martires said his field investigators “were given a runaround by some DOH officials and personnel by referring us from one department or office to another.”

Under the Bayanihan to Heal As One Act, public bidding was suspended and the government was given a free hand to resort to negotiated procurements to respond to the emergency nature of the pandemic.

According to experts whom Rappler earlier talked to, negotiated procurements are open to abuse, and can be a source of corruption because they give the procuring agency some leeway to choose its suppliers.

The pandemic has limited the work of the Office of the Ombudsman, as well as the anti-graft court Sandiganbayan, where hearings are still suspended until at least the end of June.

In April, 14 senators called for Duque’s resignation for his “failure of leadership, negligence, lack of foresight, and inefficiency in performance” in relation to managing the coronavirus pandemic. Opposition senators had also said that Duque “compromised” the government’s coronavirus response.

President Rodrigo Duterte, however, had repeatedly expressed his trust and confidence in Duque, instead blaming his subordinates for lapses in coronavirus-related government efforts.

“The lapses they committed have exposed to risk the welfare of the entire nation. Secretary Duque, in particular, has failed in his job. The people have every right to demand accountability,” Drilon said.

“The Ombudsman’s intervention should remind our officials to fulfill their responsibilities with utmost integrity and honesty. You cannot escape accountability,” the minority leader added.

Lacson added that he hopes the Ombudsman would find those who are liable and “suffer the consequence of misdeeds in taking advantage of the COVID-19 crisis for self-aggrandizement.” – with reports from Bonz Magsambol and Pia Ranada/Rappler.com