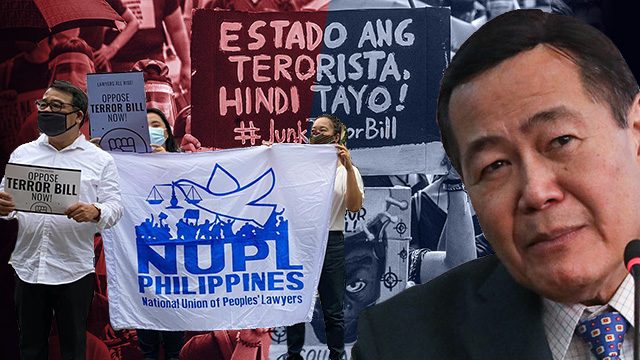 MANILA, Philippines – Critics are ready to file with the Supreme Court (SC) a challenge to the anti-terror bill as soon as it is signed into law by President Rodrigo Duterte.

The National Union of Peoples’ Lawyers (NUPL) said it is “already poised to file the appropriate (and anticipatory) petition at the earliest possible time with the Supreme Court.”

“Full draft is complete, awaiting only action or inaction of the President, as the case may be,” said NUPL president Edre Olalia on Wednesday, June 17.

“I will join a petition to question the constitutionality of this law,” Carpio said on Wednesday during a webinar hosted by the Management Association of the Philippines (MAP). (READ: EXPLAINER: Comparing dangers in old law and anti-terror bill)

Carpio, highly regarded among fellow justices and employees of the High Court, said however that he would not act as a lawyer, only a petitioner.

He said it’s to follow a one-year prohibition on retired justices from appearing before the SC.

The one-year ban is lifted on October 26, and it will be a surreal moment if Carpio argues before the Bench composed of his juniors.

Carpio said he would still opt out of acting as lawyer even after October.

“No, I plan to be a petitioner,” said Carpio.

Carpio has said the anti-terror bill could be challenged right away before the Supreme Court without having to wait for a direct injury to happen. Among other reasons, Carpio said the bill’s threats to freedom of speech makes it open to a facial challenge.

“If we do not want to experience a contraction of our civil liberties, we must all work to have the objectionable provisions in the anti-terrorism act invalidated by the Supreme Court or repealed by Congress,” said Carpio.

The former SC justice also said that, while it may be difficult, it is also possible to launch a people’s initiative to try to void the law.

Carpio said there could be a “two-pronged” attack against the bill: one in the Supreme Court, and another through Congress, which can pass a bill amending the law. (PODCAST: Law of Duterte Land: Dissecting anti-terror bill and threats to freedoms)

Carpio reiterated on Wendesday that Section 29 authorizing the anti-terror council to order arrests and 24-day detentions violates the Constitution.

Pointing out that even the Consitution allows only 3-day warrantless detentions under martial law, Carpio said the anti-terror bill would be like the “Philippines is permanently under a situation worse than martial law.”

Carpio also said the bill’s Section 34, which authorizes the courts to order house arrests of suspected terrorists who are entitled to bail, would violate the constitutional right to bail.

Carpio said it’s also worrying that the bill removed the clause where the law is suspended one month before an election and two months after an election.

“The anti-terrorism act will have a devastating effect on freedom of speech and freedom of the press in the May 2022 presidential elections,” said Carpio.

Among the grounds that NUPL will raise is the vague definition of what is considered a terror act under Section 4 of the bill.

In the 2007 Human Security Act, if common crimes are committed to sow fear and panic, then they are considered terror acts. (READ: DOJ defends terror bill’s dissent exception, but leaves out ‘killer’ caveat)

The 2020 anti-terror bill adds new definitions, such as common crimes being an act of terror if they intimidate the general public, create an atmosphere or spread a message of fear, provoke or influence by intimidation the government or any of its international organization, seriously destabilize or destroy the fundamental political, economic,  or social structures of the country, create a public emergency, or seriously undermine public safety.

Carpio said these definitions are broad that a rally in the time of coronavirus can be considered as a terror act.

“The coronavirus is a transmissible disease so they’re endangering the lives of other people because they are conducting a mass event, and that creates an atmosphere of fear, so they are already committing an act of terrorism under this provision,” said Carpio.

Malacañang has said President Rodrigo Duterte is “inclined” to sign the bill into law.

The Department of Justice submitted its review of the bill to Malacañang Wednesday afternoon, but the department would not release its recommendation to the public.

Justice Secretary Menardo Guevarra, a law professor who once worked with the 1986 Constitutional Commission, has been urged by human rights groups and lawyers to “consider the Constitution” when he makes his recommendation. – Rappler.com