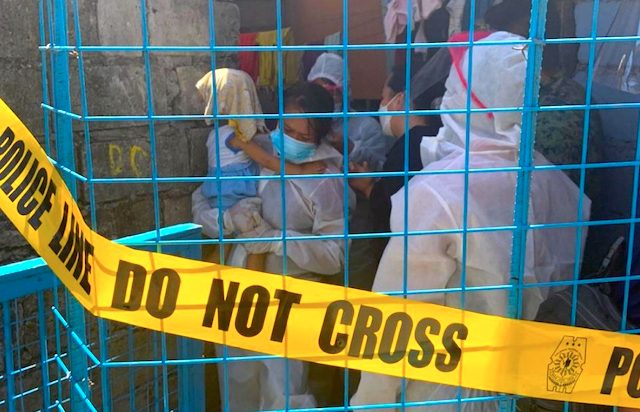 Facebook Twitter Copy URL
Copied
'One of the victims was a differently abled 27-year-old deaf female, the younger sister of the suspect and who is also the mother of some of the children rescued,' says Police Colonel Sheila Portento

MANILA, Philippines – Police arrested an online sex trafficker in Taguig City who abused 8 people, including her own son and her younger sister.

The Philippine National Police (PNP) and the International Justice Mission (IJM) said in a joint press statement that the arrest of the 30-year-old woman on Wednesday, June 17, paved the way for the rescue of her 8 victims.

Colonel Sheila Portento of ATIPD said one of the victims was  a 27-year-old deaf female – the suspect’s own sister.

“What surprised me during this rescue was that one of the victims was a differently abled 27-year-old deaf female, the younger sister of the suspect and who is also the mother of some of the children rescued. Despite her chronological age, her mental state still leaves her vulnerable to abuse,” said Portento said.

Referring to the 27-year-old victim, IJM Manila Field Office Director Reynaldo Bicol said: “The law offers greater protection to the vulnerable. The 27-year-old differently abled woman  is considered a child under the law and is entitled to an expanded care of the state which we see that the government is currently enforcing to protect her rights and pursue justice on her behalf.”

“This case shows that OSEC (online sexual exploitation of children) offenders will go to great lengths to abuse the most vulnerable, but the law shall hold them accountable to the fullest extent,” Bicol added.

Aside from the suspect’s sister, authorities also rescued 4 boys aged 2, 4, 11, and 14; and two girls aged 3 and 15. They include the suspect’s own son and her younger sister’s two children.

All the victims are undergoing the necessary trauma counseling and shelter placements, said the joint statement.

Police recovered from the suspect’s house a mobile phone, two money transfer receipts, and a USB flash drive that the suspect allegedly used in her illegal activity.

The Philippines Internet Crimes Against Children Center (PICACC), which considered a model for an enhanced global response against OSEC, helped in the investigation.

The PICACC is a cooperation among local and international law enforcement:  the PNP-WCPC, the National Bureau of Investigation-Anti Human Trafficking Division (NBI-AHTRAD), the Australian Federal Police, and the United Kingdom National Crime Agency (NCA); in partnership with IJM.

The IJM-supported police operation is also supported by the US Homeland Security Investigations (HSI).

The latest operation is the 15th carried out during the coronavirus lockdown and community quarantine.

“Despite the lockdown measures and challenges that lie ahead, we will be on the lookout for traffickers and abusers who are still exploiting children in exchange for money from online child sex offenders. We are ready to pursue them at all costs,” said WCPC chief Brigadier General Alessandro Abella.

US HSI Attaché Ricardo Navalta, for his part, said that through their strong partnership with Philippine authorities, “we are able to provide actionable leads that not only help identify and rescue victims, but help prosecute those offenders profiting from the online sexual exploitation of children.”

NBI-AHTRAD chief Janet Francisco said that the successful operation showed the potency of international collaboration and also cooperation at the local level in tracking down online sex traffickers.

David Cater, UK NCA Senior Manager in Asia/Pacific, noted that “the operational partners keep delivering the right outcomes and ATIPD have done great work on this case to safeguard another 8 victims.”

“We continue to support such joint operations with all the Philippines and international partners, which demonstrates how the best results can be achieved by working together,” Cater added.

A study released in May revealed that within 3 years, the estimated prevalence rate of OSEC in the Philippines more than tripled – from 43 out of every 10,000 Internet Protocol (IP) addresses linked to child sexual exploitation in 2014, to 149 out of 10,000 in 2017. This represents a 250% increase. – Rappler.com