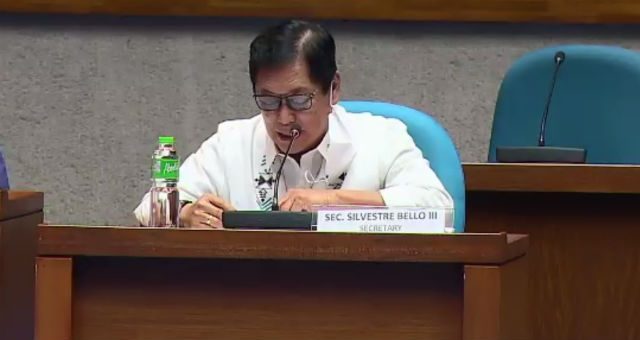 Bello made the statement as he updated the House committee on public accounts on Friday, June 26, on what the Department of Labor and Employment (DOLE) had done to assist repatriated OFWs since the coronavirus pandemic began.

Without being asked by a lawmaker, the DOLE chief raised a GMA-7 report about a group of OFWs in Riyadh, Saudi Arabia, who had resorted to digging through garbage just to find food.

(You know, Mr Chairman, the honorable members of this committee, do you really believe that a Filipino, an honorable and dignified person, would eat trash?)

He insisted what the OFWs went through was not garbage but food rejected by groceries due to quality control.

(The truth of the matter, your honor – I was a witness to things like this – in groceries in Qatar, in Riyadh, the food rejected by groceries are the ones our countrymen sorted for themselves. That’s not garbage. Those are food that did not pass the standards set by groceries.)

He then repeated that he believes no Filipino would ever resort to eating garbage, forgetting the millions of his poor countrymen back home who are left with no choice but to become scavengers.

Philippine Ambassador to Saudi Arabia Adnan Alonto earlier dismissed the incident as well, saying in a tweet that the OFWs supposedly “resorted to theatrics to catch attention.”

“If reports reaching me are true, I’m disappointed with some of our people who have resorted to theatrics to catch attention. Fact is food assistance was given. Mamulot ng basura? (Picking up trash?) C’mon!” Alonto tweeted on June 19.

If reports reaching me are true, I’m disappointed with some of our people who have resorted to theatrics to catch attention. Fact is food assistance was given. Mamulot ng basura? C’mon!

Department of Foreign Affairs (DFA) Undersecretary Sarah Lou Arriola told lawmakers during the hearing that 56,000 OFWs had been repatriated, which is about a quarter of some 154,000 still stranded abroad.

Bello referred to another GMA-7 report, saying that certain OFWs in Saudi Arabia who lost their jobs in a restaurant decided to sell their blood just to afford food.

Bello tried to make it appear that the practice of selling blood was normal and had long been done by OFWs to earn extra money.

“Alam ’nyo kasi, this is an experience – I have to be very truthful to you – ang Pilipino kung minsan, sa kagustuhan nila na makapagpadala ng pera sa kanilang maybahay dito sa Pilipinas, they go for extra money and [one of the ways] is selling their blood,” Bello said.

(You know, this is an experience – I have to be very truthful to you – Filipinos, in their desire to send money to their wives here in the Philippines, they try to earn extra money and one way they do so is by selling their blood.)

The Cabinet official added the practice had long been happening even before the pandemic.

During the same hearing, the DFA warned the P1-billion fund they were tapping for the repatriation of stranded  OFWs would likely be depleted by August 2020. – Rappler.com