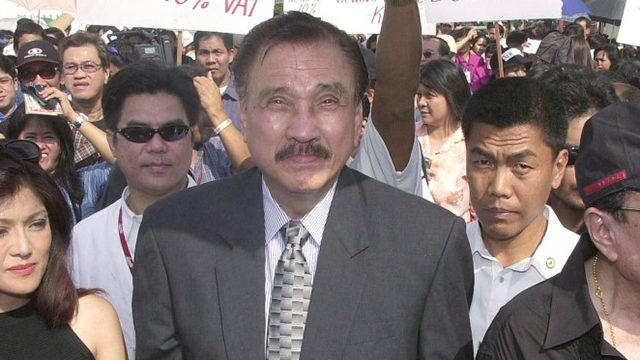 Facebook Twitter Copy URL
Copied
(UPDATED) He died of heart failure, according to the office of his son, Senator Bong Revilla Jr

Ramon died of heart failure at around 5:20 pm on Friday, according to Bong’s office.

On Thursday, June 25, Bong said that Ramon was “going through a rough time.”

Bong said in a Facebook post that Ramon went through an angiogram procedure to check irregularities in his heart, but doctors found that there was no problem. On June 14, the senator said that his father was transferred to a regular room when the latter’s condition stabilized.

“Maraming salamat sa lahat, Daddy (Thank you for everything, Daddy). I may no longer be able to hug you when I need comfort or talk to you when I need inspiration, but you will never be forgotten. You will live in my heart forever, and in the hearts of everyone whose lives you had touched. Mahal na mahal ka namin (We love you very much),” Strike said in a statement.

Malacañang on Friday extended its condolences to the Revilla family.

“We share the grief of the Revilla clan, and as tributes pour to honor the life and legacy of this respected movie icon and public servant, we pray that the Almighty grant Mr Revilla eternal repose,” Presidential Spokesperson Harry Roque said in a statement.

Ramon first served in government service as a senior intelligence officer who headed the Secret Service Unit at the Customs Bureau from 1965 to 1972.

He then joined show business, raking acting awards such as FAMAS Best Actor in 1973 for the movie Hulihin Si Tiyagong Akyat.

Ramon first won a Senate seat in the 1992 senatorial elections. Dubbed as the “Father of the Public Works Act,” he authored Republic Act No. 8150 or the Public Works and Highways Infrastructure Program Act of 1995.

While in the Senate, he also lobbied for the movie and television industries, children’s welfare, public school teachers, athletes, and the media.

He also authored a legislation that amended and subsequently lowered the penalties imposed on the illegal possession of firearms.

“Now known as ‘The Revilla Law’ R.A. 8294 has diminished the terror of Presidential Decree 1866, a remnant of the deposed Marcos regime. The Senator crafted the law to benefit those imprisoned and persecuted during the Marcos years for their political beliefs and whose incarceration was brought about by the abusive implementation of PD 1866,” the former senator’s profile said.

Ramon served in the Senate from the 9th Congress to the 12th Congress, in a career spanning 12 years. – with reports from Aika Rey, Mara Cepeda, and Pia Ranada/Rappler.com