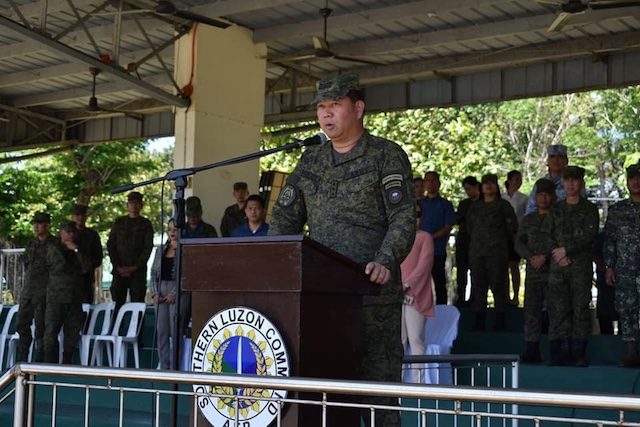 The Bayan Muna representative released a copy of his complaint to media on Wednesday, July 1, but said the complaint was submitted to the Office of the Ombudsman on June 9.

Zarate accused Parlade of violating the anti-graft law and the Administrative Code for engaging red-tagging. He wants Parlade’s dismissed from public office, and that he be placed under preventive suspension pending investigation. ([OPINION] The Philippine military and its hypocrisy)

Parlade, who is leading the military’s campaign against communism, is also a spokesperson of the National Task Force to End Local Communist Armed Conflict (NTF-ELCAF).

Red-tagging is defined by the Supreme Court as “the act of labeling, branding, naming and accusing individuals and/or organizations of being left-leaning, subversives, communists or terrorists (used as) a strategy…by State agents, particularly law enforcement agencies and the military, against those perceived to be ‘threats’ or ‘enemies of the State.’”

Zarate documented Parlade’s speeches and remarks that accused him and the Makabayan bloc in the House of Representatives as being fronts of the Communist Party of the Philippines (CPP), especially during the 2019 midterm elections.

Communism is not a crime under Philippine laws, but the Department of the Interior and Local Government has floated the possibility of restoring the anti-subversive law that criminalizes membership in the CPP.

Zarate said Parlade’s red-tagging of him and other groups is an act of graft.

Zarate said this falls under Section 3(e) of Republic Act No. 3019 or the Anti-Graft and Corrupt Practices Act which punishes, among others, causing undue injury through manifest partiality, evident bad faith, or gross inexcusable negligence.

Graft is a criminal offense, that’s why part of Zarate’s request to the Ombudsman is to charge Parlade of graft.  But the Ombudsman has the power to administratively sanction public officials even before a criminal trial.

Zarate invoked Section 55 of the Administrative Code which says “no officer or employee in the civil service including members of the armed forces, shall engage directly or indirectly in any partisan political activity.”

The Ombudsman can order preventive suspensions and dismissals upon the finding of administrative guilt.

The enrolled anti-terror bill, which will lapse into law on July 9, is feared to lead to an intensified crackdown on activism and other forms of dissent.

In response to Zarate’s complaint, Parlade said, “To inform the people and expose to them the real nature of terrorist organizations representing themselves as advocacy groups is the job of the government.”

“Again, its not us who identified their group as reds. It was Joma Sison and to this day the CPP is consistent in tagging them as their red allies. Is Rep Zarate denying this fact? If not, what’s wrong with the government calling a spade a spade?” he said.

“We will be remiss with our job if we continue to allow the people to be fooled by these criminals, by not informing them of the terrorist nature of these Kamatayan bloc,” Parlade added. – Rappler.com