Arrested in 2019 crackdown, jailed activist gives birth in a pandemic

Jul 2, 2020 7:49 PM PHT
Lian Buan
Facebook Twitter Copy URL
Copied
Ina Nasino, 23, pleads with the court to let her stay with her baby, either at the hospital or at a prison nursery, until at least the child is 6 months old 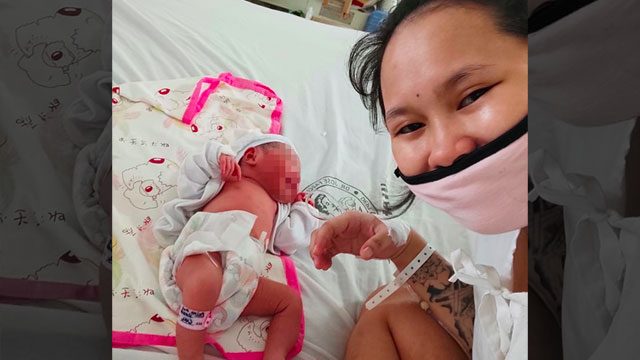 MANILA, Philippines – Pregnant Reina Mae “Ina” Nasino, 23 years old, was awakened by noise in the wee hours of the morning on November 5, 2019, by policemen who would later arrest and jail her.

This was at the peak of crackdown on activists in late 2019, with police arresting without warrants as many as 62 activists in a span of days.

Eight months later, on Wednesday, July 1, as the coronavirus raged in Philippine jails, she gave birth to her baby girl at a hospital, on furlough and uncertain if she would get to raise the child in her formative months.

By Friday, July 3, Nasino would have to go back to the female dormitory of the Manila City Jail, and leave her newborn baby without her breast milk, among others.

“Immediate separation by the child from her mother is not in the best interest of the baby, since she will be deprived of motherly care at a very early age,” said Nasino’s pleading, filed before the Manila Regional Trial Court Branch 20 on Thursday, July 2. She pleads that she be allowed to stay with her baby until at least the child is 6 months old.

Nasino pleaded the court to either let her stay at the Dr. Jose Fabella Memorial Hospital, or let her stay at a prison nursery inside prison where they would be provided hygienic and lactation facilities.

Nasino’s supplemental urgent motion filed Thursday is a double down move by her lawyers, who have gone all the way to the Supreme Court to try to free Nasino and other political prisoners at least while the pandemic rages on.

The petition, filed 3 months ago, is anchored on humanitarian considerations in a pandemic – an issue largely unexplored in jurisprudence.

The Supreme Court has not made a decision yet, even though Chief Justice Diosdado Peralta earlier announced it would be resolved June 16. That day has come and gone without an action.

As of June 11, there were 745 prisoners and 125 personnel positive for coronavirus in Bureau of Jail and Management Penology (BJMP) facilities. These are inmates on trial, excluding convicts.

In BJMP facilities, at least 6 prisoners have died of the virus.

The BJMP said Thursday that, during the pandemic, as many as 15,000 prisoners have been released because of different Supreme Court measures to decongest jails. (PODCAST: Law of Duterte Land: Legal difficulties of a prisoner mass release)

Nasino does not feel the decongestion efforts. She is in a jail cell that holds 80 inmates, when its maximum capacity is only 40, she said in her pleading. (READ: ‘TAKOT NA TAKOT KAMI’: While government stalls, coronavirus breaks into PH jails)

“The cruel and inhumane conditions of her detention at the Female Dormitory of the Manila City Jail are disadvantageous for breastfeeding. This is even aggravated by the outbreak of the COVID-19 virus,” Nasino said.

Nasino pleaded the court to compel the prison to set up a  nursery with lavatory, refrigeration for breastmilk, electrical outlets for breast pumps, small table and comfortable seats, and other items needed for raising a newborn.

But what she would rather have is temporary freedom, which only the Supreme Court can give her.

“We regret that the High Tribunal did not take action with exigency. If only they were able to decide earlier and did not let almost 3 months pass, Reina Mae could have given birth without fearing for her life and her child,” said Fides Lim, spokesperson for prisoners rights group Kapatid.

“First and foremost, the arrest of Reina Mae is illegal and the search warrants used to justify her arrest are marred with irregularities,” said Nasino’s lawyer Maria Sol Taule.

Nasino is an urban poor oranizer of Kadamay in Smokey Mountain, Tondo.

She was living in an apartment in Tondo that also serves as the office of the Manila chapter or progressives group Bayan, when policemen in Special Weapons Tactics (SWAT) uniform barged in, armed with a search warrant.

Nasino is only one of the 62 activists arrested in Manila and Bicol on the power of different search warrants issued by one judge: Quezon City Regional Trial Court (RTC) Executive Judge Cecilyn Burgos Villavert.

Police raids resulted in caught-in-the-act arrests for illegal possession of firearms and explosives, and which has been justified by the Supreme Court as regular.

Nasino’s lawyers had tried to get copies of Villavert’s search warrants, alleging that the address on the warrant was different from the address that was raided.

The Constitution requires that a search warrant must be issued only after the applicant “particularly describes the place to be searched.”

“Unfortunately, Judge Burgos-Villavert refused to provide the said documents on the ground that, as per the Office of the Court Administrator (OCA), a subpoena must first be requested to and issued by the court where the case has been filed,” Nasino said in her motion to quash.

Instead of issuing a subpoena, Manila RTC Branch 20 instead required Nasino’s lawyers to request the OCA to exempt them from the rule, the pleading said.

Manila RTC Branch 20 has yet to act on Nasino’s motion to quash.

By July 5, Nasino would have been in jail for 8 months.

“We respectfully ask the justices to immediately decide on our petition that simply seeks to give vulnerable prisoners a fighting chance for survival against the deadly coronavirus disease, which continues to destroy lives in highly congested prison facilities,” said Lim. – Rappler.com