Jul 7, 2020 12:56 AM PHT
Rappler.com
Facebook Twitter Copy URL
Copied
In 2018, the international nongovernmental organization Global Witness said the Philippines was the most dangerous country to be an environmental activist 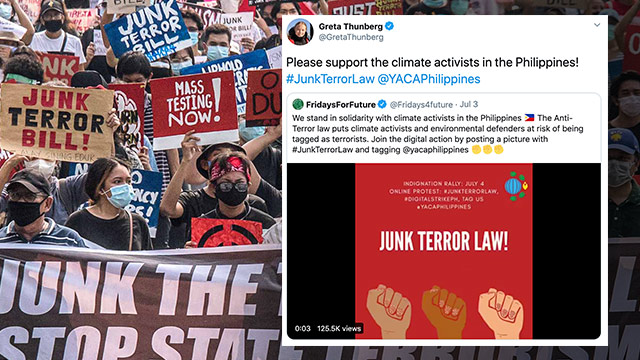 MANILA, Philippines – Greta Thunberg threw her support behind climate activists in the Philippines who are speaking out against the recently passed anti-terror law.

The Swedish teen has become the global face of the growing youth movement against climate inaction. Her global climate movement “Fridays for Future” began in August 2018, when she started sitting alone outside Sweden’s parliament with her now iconic sign reading, “School strike for the climate.”

The climate activist and Time magazine’s 2019 Person of the Year also tagged the Youth Advocates for Climate Action Philippines’ Twitter account in her post, which has gained over 4,800 retweets and 12,500 likes as of this writing.

In the original post, the FridaysForFuture Twitter page said it stands in solidarity with climate activists in the Philippines.

“The Anti-Terror law puts climate activists and environmental defenders at risk of being tagged as terrorists,” the post said.

In 2018, the international nongovernmental organization Global Witness said the Philippines was the most dangerous country to be an environmental activist.

Just last month, cops in Palawan held at gunpoint and arrested environmental law enforcers who were visiting a coastal village on June 10 to serve a vacate notice to informal settlers occupying a key mangrove area.

President Rodrigo Duterte signed the anti-terror bill into law on Friday, July 3, despite fierce opposition from different sectors of society who believe the law poses “dangerous” threats to Philippine democracy.

Groups are concerned over several provisions of the law, including the prolonged detention without judicial warrant and the lack of accountability for authorities in the event of “delay in the delivery of detained persons to the proper judicial authorities.”

The Philippines’ Commission on Human Rights earlier warned against the law’s broad definition of what constitutes as terrorism. United Nations human rights chief Michelle Bachelet had also urged Duterte to refrain from signing the bill as it “heightens our concerns about the blurring of important distinctions between criticism, criminality, and terrorism.” – Jee Y. Geronimo, with reports from Jodesz Gavilan/Rappler.com