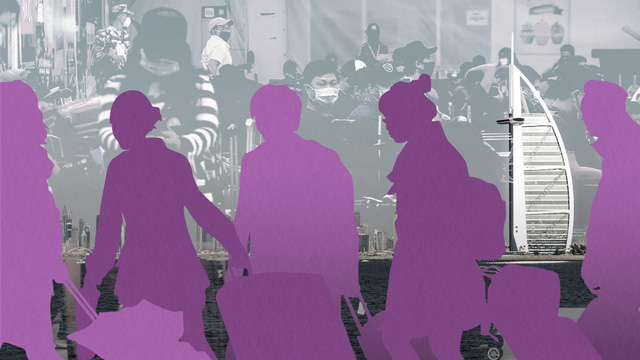 DUBAI, United Arab Emirates – Some 3,000 overseas Filipino workers (OFWs) here heavily affected by the COVID-19 crisis have sought help from the Philippine Consulate for their repatriation.

This, according to Consul General Paul Raymund Cortes, who said most of those seeking assistance are jobless OFWs with no regular food supply nor place to stay as they have been behind rent payments.

“We have received a considerable number of requests and messages for repatriation. We ask for everyone’s patience as we are still sifting through all requests. As soon as the schedules for repatriation are finalized, the consulate will inform everyone of the repatriation details,” he told Rappler.

Cortes said priority is being given to pregnant women, seniors, those with medical conditions, as well as tourist and visit visa holders.

(We’re also waiting for the approval to purchase tickets, so we’re asking for a bit of patience. You will be accommodated. We’re just prioritizing those who are pregnant and sick. We’re doing everything that we can. We hear you, and we really consider this a priority.)

Cortes made the assurance even as a group of about 1,200 OFWs, most of whom booked flights as early as April, have remained stranded here following repeated cancellations of their flight schedules.

Rachelle Sytangco (not her real name) said a major concern among the stranded OFWs is overstaying as the 30 days allowed for them to remain in the UAE after termination from work have almost been used up, while others have already gone beyond that grace period.

The law charges a Dh200 overstay fine for the first day, and Dh100 for each day from the second day onwards. A service fee of Dh100 is also charged at the time of exit.

The government has eased its immigration policies amid the pandemic.

Holders of visas that expired before March 1 have until August 18 to leave. Meanwhile, for visas that are valid from March 2 onward, the government extended their validity until December 31.

The regulations also cover visit visa holders, but not those whose employment or residency visas have been canceled following termination of employment.

Sytangco, whose residency visa was canceled on June 7 and who is now on a three-month visit visa that she applied for to buy more time, said she was fortunate to have the needed money to extend her stay.

“Hindi po lahat kaya magbayad ng visa (Not everyone can pay for a visa),” she said.

Their Facebook group, which was formed on May 21 and has a growing number of members – almost 1,200 members as of this writing – is comprised of OFWs who booked flights with Philippine Airlines (PAL).

(Some asked for a refund from PAL and bought tickets elsewhere. The rest either rebooked to August or are waiting. Almost all of us have tickets, but the problem really is there are no flights.)

The airlines have been explaining that flight cancellations are a result of changes in the Philippine government’s COVID-19 measures, considering quarantine procedures, among other issues.

Phillipe Liwaliw, one of the Facebook group’s administrators and a flights operations officer for a private aviation company, urged the Department of Foreign Affairs (DFA) to put more effort in addressing the plight of stranded OFWs.

(I’m calling on the government to pay attention to our OFWs and not neglect them during this time. The impact of the pandemic on our OFWs has been immense. Many want to return home because of the hardships of living abroad, since they won’t receive any financial assistance from the government right away and there is no guarantee that everyone will receive enough help.)

Liwaliw is on a 3 to 5-month forced leave and is now in Manila.

(It would cost me a lot if I stayed in Dubai. I was forced to book multiple tickets because my flights were canceled several times. After booking a flight, it would be canceled, and then they will open another slot and cancel the previous booking. The rebooking process also took time. So it’s hard for our fellow Filipinos who do not have the money to rebook.)

“This July, we only had 4 flights and one was chartered by a company. Hopefully in August ay madagdagan (there will be additional flights). Niri-review naman nila ‘yan sa Manila (They review that back in Manila) every month,” Pagaduan said.

She explained that those whose flights have been canceled have the option to rebook, refund, or convert the booking into an e-travel voucher that they can use later on, even after a year.

She said those who are holding tickets for flights that were canceled between March 20 and July can approach PAL’s office in Dubai or Abu Dhabi for appropriate action, including refunding, provided it was directly bought from the airline.

Pagaduan explained that there have been cases where refunds took time because the tickets were bought either from an online travel agent or paid through credit cards.

“PAL cannot refund them. ‘Yung agent ang magre-refund (It’s the agent who will refund them). Kung diretso sa PAL binili ang ticket and cash ang payment (If the ticket was bought directly from PAL and it was paid in cash), we can automatically refund it, just give us 1 or 2 days,” Pagaduan said.

She added, “Hindi pa rin normal ang operations sa Manila office. Hindi pa rin pinapapasok ang mga tao. So may delay, pero pino-process naman.” (The Manila office has not yet resumed normal operations. Employees have not been asked to report to work. There are delays, but the processing is ongoing.)

Her advice to those who have bookings with PAL? “Mag-reach out lang kung kailangan ninyong mag-refund, rebook, or travel voucher.” (Just reach out if you need to rebook, get a refund or a travel voucher.)

The DFA has a repatriation program and recently chartered a flight for over 300 OFWs. Pagaduan said PAL was able to accommodate the Philippine Consulate’s subsequent smaller repatriations in June.

There were more but Pagaduan said “hindi naming kaya na lahat sila i-accommodate (we can’t accommodate all of them).”

She said PAL is only allowed 350 passengers by the Inter-Agency Task Force for the coronavirus in Manila.

Pagaduan said that those holding tickets may get in touch with PAL through the following numbers and email addresses: