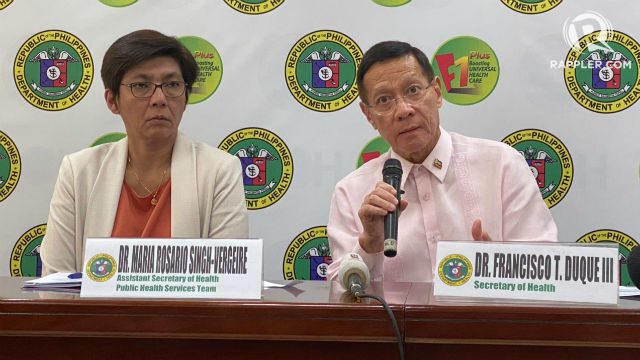 Facebook Twitter Copy URL
Copied
The DOH says it is 'seeing an increase in the number of reported cases, recoveries, and deaths in the country' based on its initial findings on the numbers for Sunday, July 12

MANILA, Philippines – The Department of Health (DOH) failed to release the daily COVID-19 case bulletin for the first time on Sunday, July 12, due to “significant volume of data gathered.”

“Due to the significant volume of data gathered today as part of DOH’s efforts to harmonize data with the cities of NCR and the different regions, the DOH Data Team is still currently in the process of validating today’s numbers,” the DOH said in a statement sent to reporters late Sunday night.

The DOH also said that, based on its initial findings on Sunday’s numbers, it was “seeing an increase in the number of reported cases, recoveries, and deaths in the country.”

“We recognize the importance of providing real-time information. However, in providing this information, we also make sure that said information is accurate,” the DOH said.

A “comprehensive report” on Sunday’s COVID-19 case updates will be released on Monday, July 13, at 8:30 am, the DOH said.

The DOH’s daily coronavirus bulletin comes out at 4 pm every day. Newsrooms in the Philippines had stayed up until midnight Monday for the updates, while many social media users were posting questions about what could be the reason for the delay.

For 9 straight days before Sunday, the DOH had been tallying over 1,000 confirmed coronavirus infections daily.

As of July 11, the country has 85 licensed testing hubs, while its testing capacity hovered around 16,000 to 21,000 last week. This is still below the 30,000 testing capacity that the government targeted to have in May.

The country has so far tested over 870,000 individuals out of the government’s total target of two million or 2% of the country’s 110 million population.

On Wednesday, July 8, the DOH reported 2,539 confirmed cases of the disease – the highest single-day increase so far. On Saturday, July 11, the Philippines recorded 1,387 confirmed new cases, bringing the total cases in the country to 54,222, including 1,372 deaths and 14,037 recoveries.

The DOH said the continued increase in cases is a reflection of an expanded testing capacity, but it also admitted that increased exposure because of the easing of quarantine was another factor.

According to a projection of the University of the Philippines COVID-19 Pandemic Response Team, the number of coronavirus cases in the country might hit as high as 95,000 by the end of August.

As of Friday, July 10, the DOH said it  was working with a backlog of 12,208 tests. The government was able to decrease the backlog in late June to only 3,608, but the number rose again in early July. – Rappler.com