Solon sacked for not signing impeachment?

MANILA, Philippines – On Monday, Dec. 12, 2011, Batangas Rep. Hermilando Mandanas did not sign the impeachment complaint against Chief Justice Renato Corona. Last night, he received a call from Speaker Feliciano “Sonny” Belmonte informing him that the leadership is replacing him as chairman of the powerful ways and means committee.

Is there a connection? 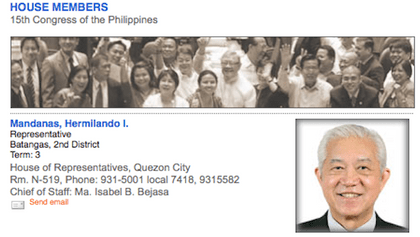 Majority floor leader Mandaluyong Rep. Neptali “Boyet” Gonzalez II said there is none. “The removal of Rep. Mandanas as chairman of the committee on ways and means has absolutely no connection to his refusal to sign the impeachment complaint,” he told reporters on Wednesday, Dec. 14, 2011.

Gonzalez said the party had long decided to replace him but only defered the decision. “The partt talked about when to implement this. The party did not agree with Congressman Mandanas on a lot of issues, especially on matters pertaining to taxes,” he said in a mixture of Filipino and English.

The majority floor leader cited Mandanas’ position on the Internal Revenue Allotment, the share of LGUs from government collection. Mandanas insisted that even the collection from Customs should be part of the IRA for the LGUs. The position of the national government is that the IRA should be limited to collections made by the Bureau of Internal Revenue, according to Gonzalez.

“It is to his fortune that there was an impeachment, and he can claim that his removal has something to do with this. But he should not make a big deal out of it at our expense, because this is a decision reached by the party a long time ago,” he said.

Why implement the party decision today? Gonzalez said it’s because it’s the last day of session.