MANILA, Philippines – Many years back, pork barrel misuse came in the form of kickbacks that lawmakers reap from favored contractors who bagged rigged bidding contracts in public works projects like farm-to-market roads and construction of school buildings.

The kickbacks, which ranged between 20% to 50%, inevitably led to substandard and incomplete projects, and in some cases, non-existent ones. At the time, lawmakers had total discretion over where and how their pork barrel would be allocated.

The public outrage that resulted from this system led to reforms involving the use of congressional allocations of lawmakers were used. The Department of Budget and Management under Emilia Boncodin came up with a “list of menu” where the pork barrel can only be allocated.

Another Boncodin reform also limited lawmakers’ discretion over their Priority Development Assistance Fund, reassigning the implementation of their pork barrel to the government agencies.

But graft and greed have a way of going around the system.

As it appears, pork barrel abuse has worsened, taken to a higher level of misuse. While a portion of the pork barrel went to substandard projects, this time, PDAF is split between the supplier and the lawmaker, funneled directly to private pockets and bank accounts.

The infographic below shows how the pork barrel scam has mutated since the reforms were introduced. Data below were provided by whistleblowers, erstwhile employees of Janet Lim-Napoles, to Levito Baligod, detailing the flow and trail of pork barrel. Hover over the “i” icons in each square and understand what happens every step of the way. 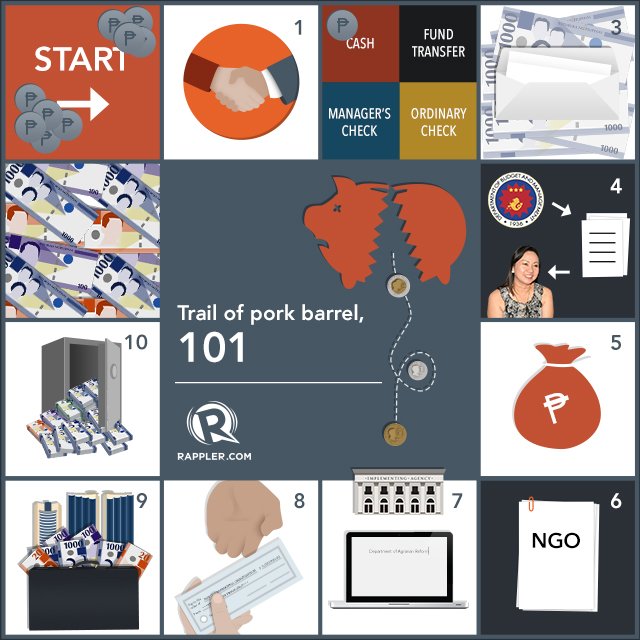