“Let me be honest, candid, yet factual about it. I would be very interested in seeking a higher office in 2016 for the simple reason that I’m halfway through my last term,” the senator told Rappler CEO Maria Ressa on #TalkThursday.

Escudero will seek re-election next year for his second 6-year term in the Senate. The Constitution only allows senators two interrupted terms, or a total of 12 years. If Escudero wins he will serve until 2019.

It does not matter even if his close ally Vice President Jejomar Binay, whom he vigorously endorsed in 2010, has declared his presidential bid. (Escudero played a big role in pushing for the “Noy-Bi” tandem of President Benigno Aquino III and Binay.)

“In any of my candidacies since 1998, I never decided based on who the opponent would be. That would be a basic chink in your armor, a weakness in any candidacy,” Escudero said. “You should run on the strength of your own position, which was what we used when we decided not to run to run in 2009,”  he added.

Up for grabs in 2016, aside from the presidency, is also the vice presidency. Binay and Escudero are considered close political allies today.

Despite the surveys in 2010, Escudero recalled that he and his team were not convinced that they could launch a credible campaign. 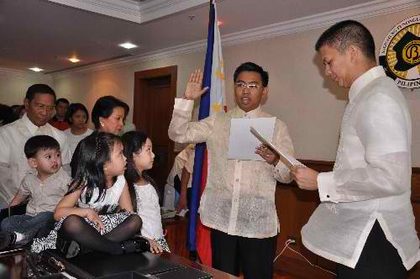 Platform of change
Becoming president is the fastest way to change the country’s political landscape, he said.

“If you become the chief executive of the country… [that is the] only one way to make real and meaningful change that fast and that quick,” Escudero said.

In 2009, at the height of calls to make him run for president, Escudero dramatically bolted his political party Nationalist People’s Coalition (NPC). It was said to be because party chairman Danding Cojuangco refused to fund his presidential campaign, causing a reported falling out between the two (Cojuangco later backed Aquino’s candidacy).

Escudero then said he merely wanted the people to propel him to the presidency, not the political party.

Escudero holds the same position today. “Hopefully we will be able to show that political parties are not the way to go,” he reiterated to Rappler.

“I might not make it (as president) because of the same reason. Or if ever I do make it then that’s the best chance I have or the people have in achieving change,” he said.

Change, Escudero said, means concentrating on frontline government services that engage people in a more direct manner like focusing on economy, eradicating corruption in customs, and making it easier to get licenses and passports. – Rappler.com