Nov 9, 2013 7:09 PM PHT
Facebook Twitter Copy URL
Copied
(UPDATED) Here's an updated timeline of how this year's strongest typhoon devastated areas of the country and how government is responding to the disaster 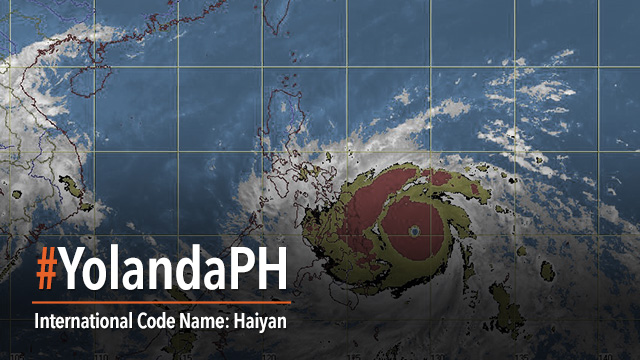 MANILA, Philippines (UPDATED) – The country has just survived Super Typhoon Yolanda (international codename Haiyan), now considered as one of the most catastrophic cyclones this year.

The super typhoon brought strong winds and whipped up storm surges that battered parts of Eastern Visayas. State weather bureau PAGASA raised Storm Signal No. 4 in some affected areas – only the 15th time the high alert level was raised in the country.

Here’s a short timeline of how this year’s strongest typhoon developed and hit the country:

A low pressure area (LPA) develops east of the Pacific islands of Micronesia.

As the LPA intensifies, the Japanese Meterological Agency (JMA) and the Joint Warning Center (JTWC) classify it as a tropical depression. Typhoon warning is raised in the islands of Palau and Micronesia.

JMA and JWTC upgrade it to a tropical storm and assign the name Haiyan.

The storm becomes a typhoon as it passes through Micronesia, and is forecast to hit the Philippines.

JWTC notes the storm has become a super typhoon as it passes over Palau. PAGASA assigns the name Yolanda and raises storm signal No. 1 in eastern Visayas and Mindanao.

Yolanda enters the Philippine Area of Responsibility (PAR), triggering storm signal No. 3 in eastern Visayas and Mindanao in the morning.

As the super typhoon intensifies, the storm warning is upgraded to signal No. 4 in the evening.

In a televised address in the evening, President Benigno Aquino III urges Filipinos not to take chances.

Yolanda makes initial landfall on Eastern Samar at 4:40 am and goes “island hopping.”

PAGASA’s morning bulletin records maximum sustained winds of 235 kph and gustiness of up to 275 kph. 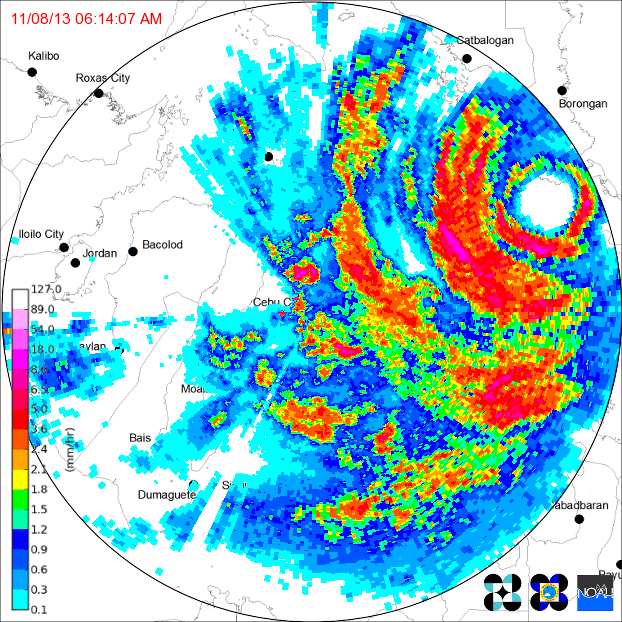 Many areas have become out of reach as the typhoon destroyed power and communication lines.

The government closes down major airports and ports.

The super typhoon weakens in the afternoon and evening as it makes its way out of the country.

The typhoon hovers over South China Sea in the morning, with public storm signals across the country lowered.

The typhoon finally exits the country in the afternoon and heads toward Vietnam and southern China, but leaves behind a massive trail of death and destruction in various parts of the country.

Red Cross claims that about 1,200 people are believed to have died in Leyte and Eastern Samar alone.

Most airports – shut down during the onslaught of the typhoon – resume operations, while telecommunication companies say it will take 2-3 days before they can restore communication lines in the Visayas.

The Department of Social Welfare and Development (DSWD) estimates that more than 2.1 million familes, or around 9.53 million individuals, are affected by typhoon Yolanda.

Dismayed with the level of response to the typhoon, Aquino is said to have walked out of a briefing with some officials, but returns to the meeting shortly after. Communications Assistant Secretary Rey Marfil later denies the walk out, saying the President only took a bathroom break.

Senator Francis Escudero says the Senate is looking into the creation of a special fund in the 2014 budget that will finance the rehabilitation of areas damaged by Yolanda and the earthquake in October, with Senate President Franklin Drilon proposing a P10-billion fund.

The National Disaster Risk Reduction and Management Council (NDRRMC) confirms at least 1,774 deaths, with the bulk coming from Eastern Visayas.

The Philippine National Police deploys at least 883 personnel to affected areas, including more than 400 to Tacloban City, Leyte alone. A bulk of the PNP personnel sent to the Visayas – specifically Leyte, Samar, Cebu and Panay Islands – are Special Action Forces (SAF).

Naderev Saño, the Philippines’ Climate Change Commissioner, urges participants in the United Nations Climate Change Conference in Warsaw, Poland to end the climate crisis “madness” and pledges to fast during the talks until there is “a meaningful outcome” to the discussions.

In a televised address in the evening, President Aquino declares a state of national calamity “to hasten the action of the government to rescue, provide help, and rehabilitate the provinces affected by Yolanda.”

A Bloomberg report says that losses from Yolanda could reach as much as $15 billion, or around P650 billion, making it one of the most expensive disasters in Philippine history.

The United Nations (UN) and the Department of Foreign Affairs (DFA) launch an action plan to help rehabilitate the affected provinces. Prior to that, foreign governments and multilateral groups pledge to support and assist the Philippines in coping with the disaster.

The influx of foreign aid is prompted by the extensive coverage of international news agencies, which criticizes the government’s slow and disorganized relief distributions. 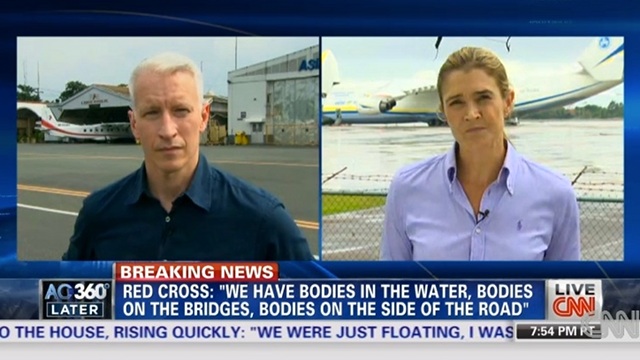 The Department of Budget and Management (DBM) says government can put together up to P26.84 billion to help assist victims and rehabilitate affected areas.

In Tacloban City, the government deploys armored vehicles, sets up checkpoints, and imposes curfew to help end looting in the city.

In a CNN interview, President Aquino says the actual death toll is lower than the 10,000 earlier estimated by local officials, saying that the number they are working on right now is only between 2,000 to 2,500.

International news agencies, including CNN, report that government’s relief efforts had been slow and delayed. The Palace reacts, citing challenges in distribution and giving assurances it is working toward providing aid the quickest way possible.

Local anchor Korina Sanchez reacts negatively to reports of CNN’s Anderson Cooper, saying he didn’t know what he was talking about.

DBM announces the early release of year-end bonuses to goverment employees affected by the super typhoon.

Senate increases to P15 billion the amount to be set aside in the 2014 budget for rehabilitation, repair and construction work in areas devastated by Yolanda and the 7.2 magnitude quake in the Visayas.

The International Rice Research Institute (IRRI) announces it will distribute flood-tolerant rice to farmers in devastated areas, as damages to agriculture stands at P6.9 billion.

US Navy ships arrive in Eastern Visayas to help in relief efforts.

The United Nations shares the frustration of typhoon victims over the slow delivery of aid to affected areas.

Over a week since the typhoon, local government officials blame the national government, while disaster management experts are more understanding.

The government finally decides to airdrop relief goods to remote barangays, an idea that was earlier dropped because of supposed risks.

On Day 9, relief goods finally reach all 40 towns in Leyte.

Aquino returns to Tacloban City to oversee relief operations. The president praises the officials of Guiuan, but chides other officials.

Tacloban Mayor Alfred Romualdez takes a swipe at Aquino who vented his ire on local governments that failed to prepare for the super typhoon. – Rappler.com

Get the latest info on the status of areas affected by Typhoon Yolanda (Haiyan).