Is Corona entitled to retirement pay? 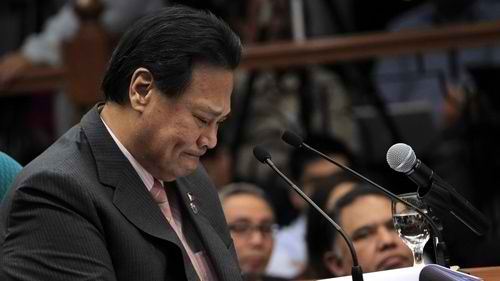 MANILA, Philippines — It’s the Supreme Court’s unfinished business with dismissed Chief Justice Renato Corona. The en banc is expected to decide next month, January 2014, if he is entitled to a retirement pay, according to a source in the High Court.

The High Court was originally scheduled to tackle the matter next week, December 10, but the justices decided to postpone it.

Rappler learned that in a letter he sent to the Court middle of this year, Corona asked his former colleagues to allow the release of his retirement pay. If he did not send the letter, the Court would have no reason to discuss the matter.

An appointee of former President Gloria Macapagal-Arroyo, Corona still has friends in the High Tribunal. The Court is still dominated by Arroyo appointees.

Corona denied he’s asking for P50M, but he was silent on whether he indeed asked the Court to grant him retirement pay. The P50M is the same amount that senators who voted to convict Corona supposedly received after the trial. (READ: There was P50M but not for Corona conviction)

“The [FSGO] statement is untrue,” Corona said in a statement sent to reporters on Monday, December 2. “I do not know of anybody in government who ever received that kind of retirement pay.”

Lawyers familiar with the issue estimated that Corona’s retirement pay would amount to  a lump sum of P20 million.

The basic issue however is whether or not he is entitled to one.

Dismissed judges and justices are not entitled to a retirement pay, according to lawyers. The FSGO stressed Corona should not be an exemption. It pointed out that the Salary Standarization Law prescribes a uniform system for determining compensation and benefits awarded to public officials.

“He did not retire. He was thrown out of office. He has not been accepted into the Association of Retired Justices,” the FSGO argued.

The group also cited the case of Davao clerk of court Delsa Flores, who was denied her retirement benefits in 1997 for failing to disclose ownership of a public market stall in her Statement of Assets, Liabilities and Net Worth (SALN). Her case was mentioned in a speech by President Benigno Aquino III in February 2012 and cited during the Corona impeachment trial that followed.

On May 29, 2012, the Senate, sitting as an impeachment court, convicted Corona for his his failure to declare his assets in his SALN. The ruling led to his dismissal – a first of its kind in Philippine history.

The possible forfeiture of his benefits was immediately raised after his conviction.

During the impeachment trial, Corona admitted to dollar deposits totalling to at least US$2.4 million. The money was not declared in his SALN. There were other allegations against Corona in the impeachment complaint but the prosecutors focused on his bank deposits.

Over a year since his removal, Corona is still facing various cases and probes including tax evasion. (READ: Corona finally faces probers in tax case) —Rappler.com