A long fight begins to save Philippine languages

Apr 30, 2012 12:26 PM PHT
Agence France-Presse
Facebook Twitter Copy URL
Copied
The Philippines, with 95 million people, is home to 175 languages, but some of them have just a few speakers left while others are already considered extinct because there are no more people at all who converse in them 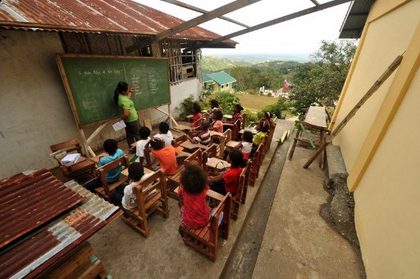 PORAC, Pampanga (AFP) – Arnel Valencia felt humiliated at school when he was barred from using the language he spoke at home, part of a decades-long pattern of linguistic destruction across the Philippines.

“‘Stop talking like a bird. You should use English or the national language,” Valencia, now 39 and a village elder, said his first-grade teacher told him.

There are only 3,000 tribe members left living in and around the small sugar farming town of Porac, guardians to one of the dozens of little-known languages in the Southeast Asian archipelago that are under dire threat.

The Philippines, with 95 million people, is home to 175 languages, but some of them have just a few speakers left while others are already considered extinct because there are no more people at all who converse in them.

Up to 50 of the country’s minor languages could be lost within 20 years, according to Artemio Barbosa, chief anthropologist at the Philippine National Museum.

“When they migrate to a certain place and they are assimilated, they no longer speak their own language because their main concern is to have an intelligible language that they can speak everyday,” Barbosa told AFP.

Experts say another big part of the problem is that the only two languages taught at school in the former US colony are English and Filipino, which is based on Tagalog that is natively spoken by people in and around Manila.

Valencia, who is a local village council member, complained that his children still could not use Ayta Magindi in school, while adults had to learn Pampangan, the main local language, to get factory or plantation jobs.

“Our language is not the only thing that we stand to lose, but also our culture,” he told AFP.

“The discrimination that we suffer has not abated.”

But there is some hope, according to Catherine Young, an endangered languages expert at the US-based Summer Institute of Linguistics who has spent a lot of time studying many of the little-known languages of the Philippines.

“There’s a growing awareness of the value of languages in the Philippines, if you compare it with other countries in Asia where (some minority) languages are publicly discouraged,” Young said on a recent visit to Manila.

She highlighted a national government decision to implement mother-tongue education from this year as an important step in that direction.

From the start of the new academic year in June, 12 of the most widely used languages will replace English and Filipino as the language of instruction from kindergarten to third grade.

The 12 languages have a combined base of more than 63 million speakers, or two-thirds of the national population.

The Department of Education said the new policy was the result of a Summer Institute of Linguistics-backed project in the 1990s to train local teachers in using Lilubuagan, spoken by 14,000 members of a northern mountain tribe.

American linguist Diane Dekker went to live with her husband and four children in the Cordillera highlands in 1987 to launch the program, initially to local skepticism.

“The parents were apprehensive that this was going to affect negatively their acquisition of English. That is very important for parents because they know that that’s crucial for getting a job,” Dekker told AFP.

But she said the Lilubuagan-taught children actually became better students because they did not have English and Filipino rammed down their throats as soon as they entered school.

“They were learning to decode a language that they didn’t yet speak, so… of course they had no comprehension of the written form of the language,” Dekker said of the problems having to study in English and Filipino.

Manuel Faelnar, vice president for the non-government group Defenders for Indigenous Languages of the Archipelago, agreed that force-feeding new languages on children when they first learnt to read and write was wrong.

“That’s why many of our kids are considered dull, slow. The teachers speak to them in Tagalog (Filipino), and if you’re not Tagalog or English-speaking, you’re lost,” said Faelnar.

One obvious problem with the government’s new program is that it covers only the most widely spoken languages, and thus continues to leave the less common ones neglected.

However the hope is that, once the program is implemented and succeeds, the government will start introducing mother-tongue instruction for the most endangered languages.

Meanwhile, the hill-dwelling Ayta Magindi in the Zambales ranges and the local government school have taken it on their own to start mother-tongue instruction from June, said the community’s Protestant pastor Benny Capuno.

Two Ayta Magindi locals have been hired to teach kindergarten at the local school, and will also help prepare mother-tongue teaching materials for the first graders.

“This should restore our young people’s pride and make them treasure our own music, our own language and our unique culture,” Capuno told AFP. – Cecil Morella, Agence France-Presse