Dec 11, 2013 1:15 PM PHT
Edwin Espejo
Facebook Twitter Copy URL
Copied
Popular US TV show TMZ says they have documents to prove that Pacquiao’s camp failed to settle his tax obligations in the US 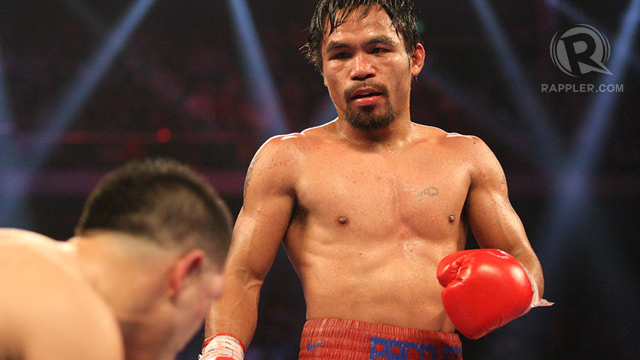 A report is out that the Internal Revenue Service of the US is, after all, running after Manny Pacquiao for unpaid taxes to the tune of US$18.3 million (over P770 million) covering the period 2006 to 2010.

The IRS is the counterpart of the Philippines’ revenue body – the Bureau of Internal Revenue (BIR).

TMZ, popular TV show in the US covering the lives and saga of Hollywood celebrities and political personalities mostly, said it has obtained documents to prove that Pacquiao’s camp failed to settle Pacquiao’s tax obligations in the US despite lucrative purses he got from fighting as a marquee fighter and a top pay per view (PPV) attraction during the period covered by the IRS levy.

This report does not include the P2.2 billion ($50 million) that the BIR has been seeking from him for years 2009 and 2010 alone. (Editor’s note: We earlier wrote $50 billion. We apologize for the error.)

This is also contrary to the statement issued by Bob Arum of Top Rank, Pacquiao’s promoter, that the Filipino’s tax obligations in the US have already been paid.

But when reached, Mike Koncz, described by Arum as Pacquiao’s financial adviser, said everything has been taken care of.

“Everything is fine,” he briefly said before hanging the phone.

Koncz used to handle Pacquiao’s finances in the US before he was eased out following the entry of Vision Quest as the Filipino fighting congressman’s accounting firm in the US.

Vision Quest however was fired after it insisted on getting copies of the fight contracts of Pacquiao from Top Rank, including proceeds from his PPV fights.

Koncz is now back as Pacquiao’s trusted adviser.

An hour after the first call, however, Koncz called back to clarify the report that came out in TMZ.

He said the $18 million being sought by the IRS is for the deductions that the US revenue body has reportedly disallowed.

Koncz did not specify which expenses they included and which were disallowed by the IRS.

He added that there may be some that will be disallowed but not as high as $18 million.

He added that the IRS issue is an entirely different situation from the case pending before the Court of Tax Appeals in the Philippines.

In the US, nonpayment of taxes could land one in jail.

The Sarangani congressman’s long time lawyer, Franklin Gacal Jr, recently suffered a massive stroke and was not available for an interview. Gacal handled all fight contracts of Pacquiao since the two bosom friends teamed up in the early 2000s.

After his rousing win over Brandon Rios in Macau on November 24, Pacquiao complained that he could not withdraw money to donate to the victims of Typhoon Yolanda (Haiyan) in Leyte after the BIR garnished his bank accounts.

BIR Commissioner Kim Henares, however, said they were only able to garnish P1.1 million from Pacquio’s known bank accounts.

A case is now pending before the Court of Tax Appeals which recently issued a gag order for both parties.

Pacquiao, a sure lock to the Hall of Fame of boxing, has earned more than $100 million in purse money, PPV sales, endorsements and other sources over the last 10 years, making him the richest member of the House of Representatives.

He used his stature as boxing icon and purse earnings to win a seat in Congress, representing the lone district of Sarangani, home province of his wife Jinkee.

His camp has also called the BIR move political harassment.

Pacquiao campaigned for former Senator Manny Villar in the 2010 presidential elections which was won by President Benigno Aquino III.

Pacquiao has since aligned himself with Vice President Jejomar Binay, who has expressed his intention to run in the 2016 presidential elections. – Rappler.com