May 9, 2012 11:24 PM PHT
Rappler.com
Facebook Twitter Copy URL
Copied
It was only a matter of time, users have jumped on to the latest scandal and have given it their own twist.

MANILA, Philippines – Filipinos have a unique ability to jump onto the latest scandal and poke fun at it in amusingly creative ways.

In 2011, they made fun of a DPWH photo release showing that turned out to be ‘Photoshopped’. Users playfully cut out the officials and put them into various scenes including the balcony where Prince William & Kate were formally introduced as husband and wife, the Last Supper, and the UAAP Cheerdance competition. 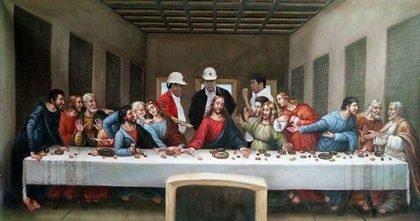 Earlier this year they also played around with the idea floated by Batangas Governor Vilma Santos to put up a Hollywood-like sign of Batangas on the Taal Volcano. And who can forget the photo of private prosecutor Vitaliano Aguire covering his ears during a rant by Senator Miriam Defensor-Santiago turned into the famous painting “The Scream”. It’s no surprise then that a day after the scuffle between columnist Ramon Tulfo and actors Raymart Santiago and Claudine Baretto took place – that the incident would take on a life of its own online. Here’s what we found being spread on Facbeook.